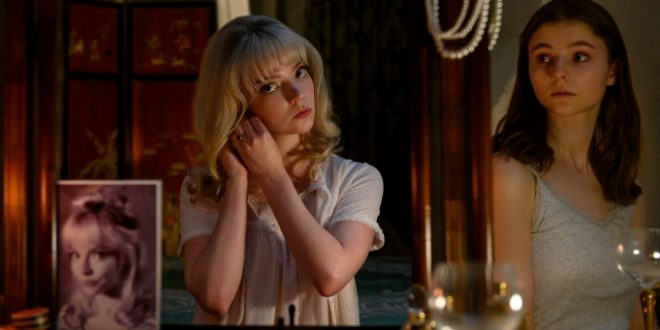 THE SQUID GAME (Netflix) & LAST NIGHT IN SOHO (in theatres)

On the surface not much in common, but after rumination, percolating beneath the exterior the filmmaker’s message simmers; one I agree with the other I question.

“THE SQUID GAME’S” (9 episodes) hypothesis is the elimination of “deadbeats” those, so strangled by debt, that they are willing to sacrifice their lives to be saved from “debtors prison”; games, compellingly clever, are the determining factor. Bothersome, was the premise that all these wastrels were on the island of elimination because the “system” had failed them. A generalization I took umbrage with; what has happened to accountability? Gambling? Borrowing to buy real estate, merchandise one cannot afford? Fostering the principle of an egalitarian society sounds viable, but in “The Squid Game”, equality is damned, and Darwin’s social realism proselytizes “survival of the fittest”.

“LAST NIGHT IN SOHO” commences with a sparkling dance number by “Eloise” (dazzling Thomasin McKenzie) as she heads to London, a neophyte fashion designer. Eloise, with gifted clairvoyancy imagines, in flashbacks, a young woman, “Sandie” (smashing Anya Taylor-Joy) luring her on to the glittering, slick streets of 1960’s London. Director Edgar Wright’s whimsical, stunningly scarry scenario, plummets viewers with a musical score that dares you to remain stationary: Sandie and Elly dance to Cilla Black’s “You’re My World” partnered with imperially perfect “Jack” (Matt Smith); the score carries one unexpectedly into a bleak, haunted, murderous milieu where pleasantries switch destinations, delving into devilish vexations and horrifying, murdering rages. Wright’s cunning subtlety weaves a woman’s fall from grace, with the ease of a master craftsman.