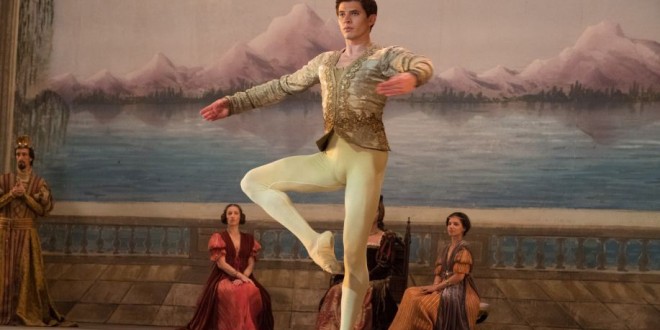 Director/actor Ralph Fiennes, with intelligence and empathy, brings to fruition Julie Kavanagh’s biography “Rudolf Nureyev: The Life”; Fiennes studies Russian, adding legitimacy to his role as Pushkin, Nureyev’s ballet instructor, and neophyte Oleg Ivenko is vastly credible as iconic Rudi, a twenty-three-year-old, imbibing in the “garden of earthly delights” in Paris, 1961. The conundrum lies in Rudolf Nureyev’s inimitable, inordinate legacy and the multitude of films documenting his dazzling, astral superiority; if you can cage those memories and focus on “The White Crow” as an ambitious, flawed, but well-meaning introspective of a poor Russian lad, born on a train in 1938, rising to celestial eminence, there’s entertainment to be had, especially in the black and white flashbacks of Rudi, “a white crow”, isolated by his rarity, cherished by his mother, fostering, encouraging, paving his track to defection and majestic esteem.

The ballets, accomplished with skill by Ivenko, flirt with, but never attain, heart-stopping inspiration and awe; Ivenko, abundantly good-looking, (Nureyev was mythically beautiful) masterfully manipulates his affair with the camera; forecasting a filmic future. “The White Crow” leaves viewers wondering, wanting more of Nureyev’s core; his love of art, especially Gericault’s “The Raft of Medusa”, and connection to the muscled, struggling sailors, cries for a deeper, more intuitive exploration.

In conclusion, we watch a five-year-old Rudi, performing his unique interpretation of a Russian folkloric dance; in this brief sequence, the genesis of his genius pole-vaults from the screen and enchantingly infects the viewer.