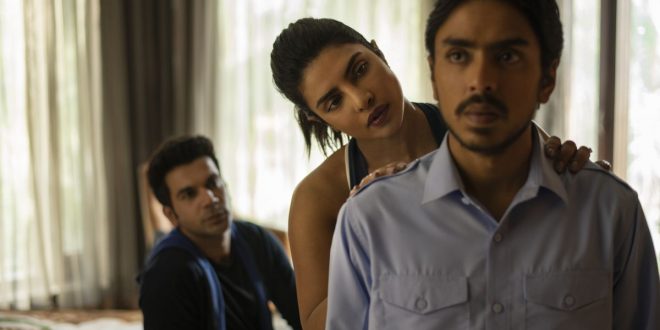 Anyone who has ever experienced the hair-raising, cacophonous symphony conducted on the streets, alleys, highways of a tireless India metropolis, will empathize completely with the skill of the conductors, drivers of any vehicle, be it rickshaw, car, bus or truck; “Balram” (Adarsh Gourav, genuinely puissant) from a lower caste, splays his rise as an entrepreneur in a series of flashbacks. Based on the 2008 novel by Aravind Adiga, “The White Tiger” sears as an adaptation worthy of Adiga’s prescient prose. Iranian/American director Ramin Bahrani, penetrates the divide between castes, the entitled versus the obsequious; a monumental democracy that crucifies one to one’s birthright; accepted corruption, bribes, avoidance of taxes; servile serving the dictates of the serviced. Balram, with raging ambition, insurmountable chutzpah, worms his way into the Brahmin home of “Ashok” (Rajkummar Rao, perpetually stellar) as his driver: Ashok and his wife “Pinky” (Priyanka Chopra, gutsy depiction) are Westernized; having staff call them by their first names, opening car doors; equalizers relating to the underdogs, until circumstances condemn both to their lineage. The “rooster coop” is a powerful metaphor for those never envisioning an exit from their predestined status.

“The White Tiger” (an exceptional rarity) marvelously interprets the “conscience” of the destitute; vivisects the grey area, questioning the parameters of the “haves” over those ignored, relegated to anonymity; in recent years the “invisible” have weaned themselves from the entrenched hierarchy achieving “democratization”, especially in Northern India. Whether spoken or unspoken the division of the populace still reeks of exclusivity and has “miles to go before” divisiveness is erased.