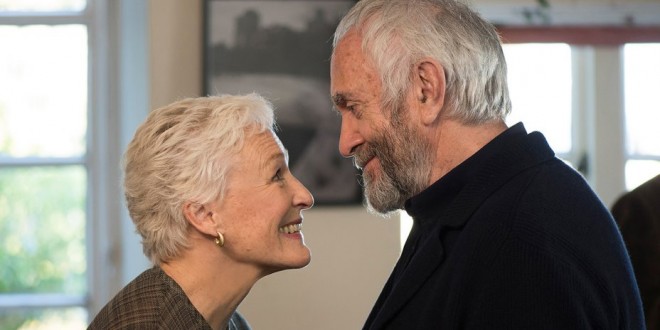 “Behind every successful man is a woman.” Director Bjorn Runge’s adaptation of Meg Wolitzer’s 2003 prescient novel portrays, with bludgeoning force, the veracity at the core of this adage.

Glenn Close’s performance as “Joan Castleman”, the dutiful, obsequious wife of Pulitzer Prize-winning author “Joseph Castleman” (caddishly wonderful, Jonathan Price) is astounding in its depth; at seventy-one her strength and intelligence as an actor is at its summit; with seething, subtle intensity she unveils Joan’s life of hypocrisy, falsehoods roiling, begging to surface, weighing the cost of exposure. She is the product of a 1950’s education, she’s talented but realizes, like many women of that generation, that her future lies in the accomplishments of her husband and she loves Joe Castleman.

“The Wife” is an evisceration of voluntary annihilation, excising of one’s inventiveness, for another’s self-aggrandizement; her vision slain for his dreams.