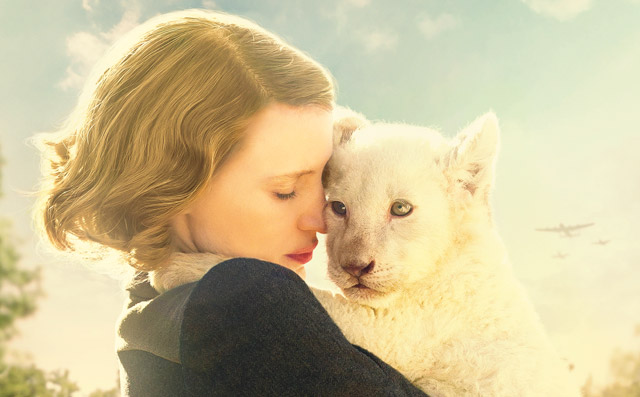 Jessica Chastain celestially soars as Antonina Zabinski, the wife of Jan Zabinski (powerful Johan Heldenbergh) chief zoologist at the Warsaw Zoo. Based on the book by Diane Ackerman and directed by Niki Caro, this true story stunning displays the narrative of real life heroes; the courageousness of their actions saved hundreds of Jews, sequestered in the Warsaw Ghetto; their fate aligned with the Nazi mission of total eradication of the Jewish people.

Gorgeously filmed, “The Zookeeper’s Wife” blazingly depicts Antonina’s empathy with/for the animals, beautifully-accented she communicates, befriends, even saves the life of a baby elephant; these intimate interactions are emotionally pulverizing; imbued with the purest joy and wonderment. Chastain owns the film.  But Daniel Bruhl as the primary Nazi zoologist, Lutz Heck, matches Chastain’s brilliance; their relationship anchors the scenario; they bond over their adoration and respect for animals, and for the sake of the hidden captives, she nurtures his growing, mesmerizing attraction to her.

As the war progresses and the zoo, a breeding mecca for pigs, grows more threatened, Antonina and Jan, intrepidly ignore their harrowing plight, daily risking their lives and their children’s to rescue the otherwise doomed. Vastly creative, is the ruse Jan uses to remove the Jews from the horrific corridors of the Ghetto.  Realistic filming of the dismantling of the ghetto and the callous herding of men, women and children into boxcars emphasizes the monumentality of their intransigence.

“The Zookeeper’s Wife” pivotally characterizes Mark Twain’s profound wisdom: “Courage is the resistance to fear, mastery of fear, not absence of fear.”

In conclusion the movie was awarded a huge acknowledgement from a packed theatre; applause and tears, worthy of this fine film and….