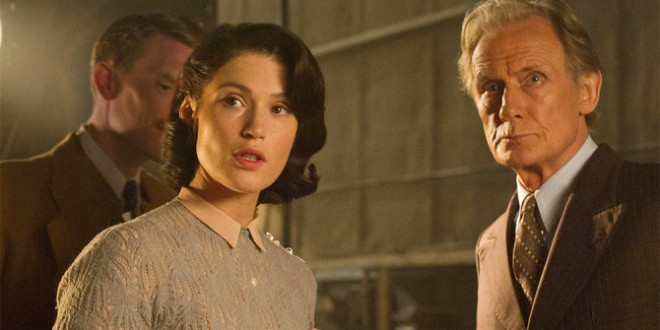 Their Finest Hour and A Half Directed by Lone Sherfig

Last year, on the advice of my sage sister, I binge-watched Britain’s television detective drama, “Foyles’s War” (2002-2015); truly one of the “finest” programs, written by Antony Horowitz, I have ever indulged in; commencing in 1940 the scenario stretches through WWII and beyond; starring Michael Kitchen as detective “Christopher Foyle” and Honeysuckle Weeks as his driver “Samantha Stewart” two of the most compelling, remarkable fictional characters you’ll ever be introduced to.

“Their Finest” directed by Lone Scherfig (“An Education”) based on the novel “Their Finest Hour and a Half” by Lissa Evans, centers on young copy-writer, “Catrin Cole” (Gemma Arterton’s, subtle, elegant performance hones the emotional sensitivities of a deft woman cornered in a chauvinistic milieu); commencing, like ” Foyles’ War” in 1940, London, Catrin is hired to work on a film about the rescue of Dunkirk; camouflaging her intelligence, she sagaciously enhances the female roles until they eventually best their male counterparts; handled with insight and hindsight, women in wartime soared in professions previously dominated by men. She swallows the pejorative, overbearing remarks of her coworker “Tom Buckley” (Sam Claflin, devastatingly wonderful) winning his respect and predictably his heart.

Screenwriter Gaby Chiappe’s, searing,  cutting, hilarious dialogue coats this “movie within a movie” with enough whimsy to obfuscate but not obliterate the trauma of war. Bill Nighy is given his usual license to imbue his roles of “Ambrose/Frank” with delicious, flamboyant, joyous eccentricities; he ignites his every scene.  Jack Lacy, as dumb, handsome American, “Carl” is positively enchanting, guileless as the heroic boy, employed to appeal to an American audience. Rachel Sterling gives a platinum performance as “Phyl”, a woman whose vision outranks her paygrade; she realizes the ephemerality of women cementing permanency in their positions when the soldiers return.

“Their Finest” with exceptional directing, writing and acting resonates, with colossal comprehension, the monumental hurdles women conquered, not on the battlefield, but at home in offices, factories, film; there are still “miles to go” but women over seventy years ago bulldozed pitfalls; trailblazers, smoothing the road for their for their twenty-first century sisters.