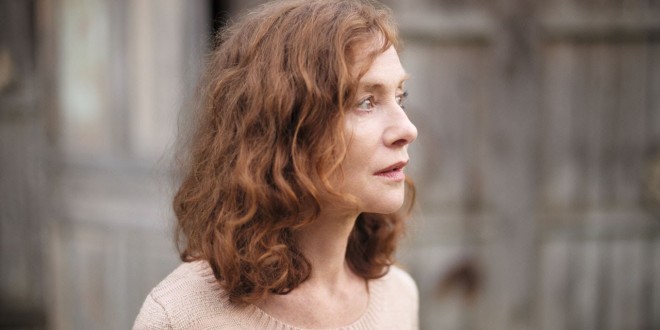 THINGS TO COME; FRENCH (ENGLISH SUBTITLES) (ON DEMAND) & IN THEATRES

Quietly profound slice of life; a moment in time that all who have reached the age of maturity will recognize its veracity, silently stunning emotional upheaval; normalcy interrupted, a catastrophic event severs the complacency of a twenty-five year marriage. Writer/director Mia Hansen-Love partners with inimitable Isabelle Huppert and paints a portrait of time, acceptance, change and openness to “things to come”.

Huppert, in a major departure from divine sexual deviates, imbued with her fathomless mastery, is philosophy teacher, “Nathalie”, as is her husband “Heinz” (Andre Marcon); honed over years their lives move at the pace of a complacent, consistent stream, until he leaves her for another woman; stupefied, but without histrionics Nathalie, processes the unfathomable, irrevocable loss of his love, and moves on.

She brazenly takes stock of the gifts she possesses, especially appreciates her keen adaptive intelligence, spurs her students through sage philosophy to think for themselves. Her relationship with a former student, “Fabian” (Roman Kolinka) avoids a prurient, predictable path; their reflective conversations revolve around diverse interpretations of philosophers (Rousseau, Solzhenitsyn), with a twenty-first century spin; still pungently alive, the wisdom of long-dead philosophers aid in Nathalie’s curative journey. Children grown, parents dead; middle age offers, for the first time, freedom, an unfamiliar taste, but delicious nonetheless.

The magnificence of “Things To Come” lies in its rhythm; routine blends the mundane with the munificent; days disappear, new becomes old; we observe Nathalie’s life and envision our own; doing our best, making choices, mistakes,  memories; in the end just pleased we’ve had the opportunity to enter the arena.