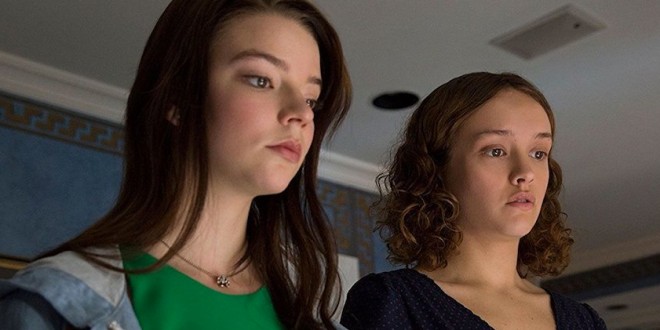 Made the agenda of 2017’s Film Festivals’ highlights; it is a creepily compelling, unnerving tale starring two phenomenal ingénue actors (Anya Taylor-Joy and Olivia Cooke) as  “Lily” and “Amanda” dames of privilege in the “Daisy Buchanan” league;  Lily, lazily living with her mother and stepfather, yearning for admission to an elite college is reunited, after years of non-communication, with a childhood friend, troubled, twisted, Amanda, who agrees to tutor her excessively spoiled colleague.

Director/writer Cory Finley, in his debut feature film (originally written for the stage) creates a scenario reminiscent of Alfred Hitchcock; not trusting the obvious, the circuitous plot plunges from simplicity to brutality; secretive, warped Amanda is haunted by a mutilated horse and incapable of fundamental human emotions; Olivia Cooke gives a striking, fascinating depiction of a brilliant, depraved prodigy. Amanda’s deviousness proves contagious, infecting susceptible Lily, who ultimately, was a more than worthy, pupil. Their egregious plot requires a perpetrator to succeed and the girls find “Tim” (Anton Yelchin gives a seedily glorious performance, in what unfortunately was his final role, before his death at twenty-seven), naïve and wholly outmaneuvered by dissolute, deplorable Lily and Amanda.

“Thoroughbreds” tightly wrought metaphorical narrative questions class elitism, birthright, and what constitutes a “thoroughbred”; in this screenplay, whether dead or alive, my money’s on the horse.