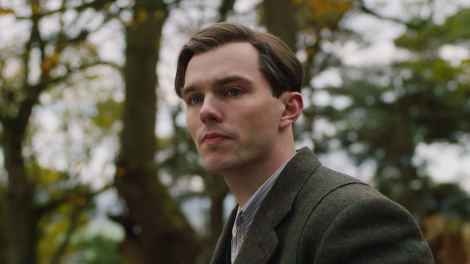 Honesty compels me to confess that I never sunk my literary molars into the realm of J.R.R.Tolkien’s (1892-1973) “The Hobbit” (1937) nor “The Lord of the Rings” (1954-55) but wallowed in mesmerizing captivation throughout Peter Jackson’s trilogy of these fantastical characters and places that sprung from the imaginative fecundity of one man; oh, to stroll clandestinely through the closets, corridors of a mind so immaculately inventive, powerfully provocative, marvelously mystifying that a fug of wonderment settles permanently with exposure to these figments of humanity, exemplifying the entirety of the human condition.

“Tolkien” played with astuteness, gentility and charisma by Nicholas Hoult commences in the detritus of the trenches in WWI; flashbacks of his orphaned life, conflicted romance with fellow orphan Edith Bratt (fragility and beauty enhanced by Lily Collins) but more than any aspect, in the gestation period of a genius, director Dom Karukoski concentrates on the birth of the “Fellowship” (T.C.B.S.); glorious scenes of male bravado, bonding, when life glowed with promise and the future was theirs to sculpt; entitlement did not stymie the initiative of Tolkien’s three friends, especially Geoffrey Bache Smith (1894-1916), (touching, sensitive Anthony Boyle) a poet, whose verse vibrates in these contemporary times; compelling and fascinating watching the competitive intellectuality of minds that could and did change the landscape of fiction.

“Tolkien” may be flawed, but remarkably proves that circumstances are indeed the fodder, father of inventiveness.