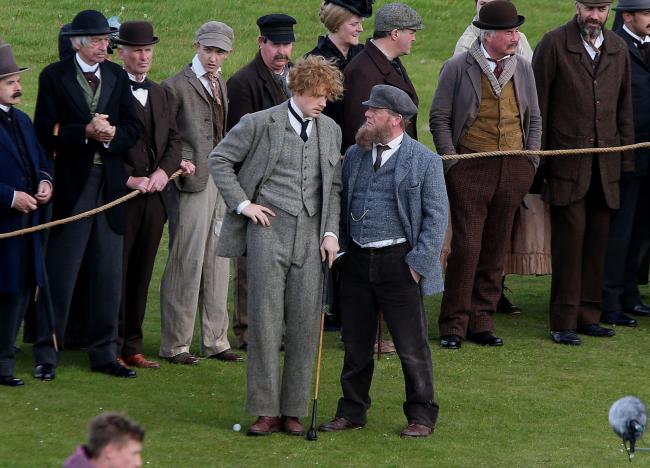 Golf has always been, and most likely always will be an unfathomable sport, its subtleties lost on the likes of me (to the frustration of my friends); my limited knowledge garnished from reading “Nancy Drew Mysteries” in my youth and viewing the sundry films focusing on the art of the game: “The Greatest Game Ever Played”, “Tin Cup”, “Bobby Jones”, “The Legend of Bagger Vance” and my personal favorite “Caddyshack”;”Tommy’s Honour” directed by Jason Connery is an empathetic biopic of Young Tommy Morris (1851-1875), ( brilliantly played by Jack Lowden), whose prodigious skill earned him four open championships before his twenty-first birthday; his father “Old Tom Morris” (1821-1908) (remarkable Peter Mullan) a legendary golfer and green keeper of St. Andrews Links in Scotland, nurtured his son’s acuity but had no control in stunting Tommy’s rebellion against the elitist gentry; Sam Neill as Alexander Boothby, represents the snobbery that informed the game in the mid-nineteenth century; Tommy ignored the hierarchical restraints confining him, in perpetuity, to the “caddy” class; his intrepidness, intransigence changed the “course” of golf forever.

“Tommy’s Honour” is a sweet, compelling story of the times, and a man who challenged the status quo and championed the right to compete in a restricted sport, opening the gates for future greats: Lee Elder, Lee Trevino, Renee Powell, Lorena Ochoa, Nancy Lopez, Tiger Woods. The nuances of the sport still defy clarity, but the heroism radiates with wisdom, refinement and glory.