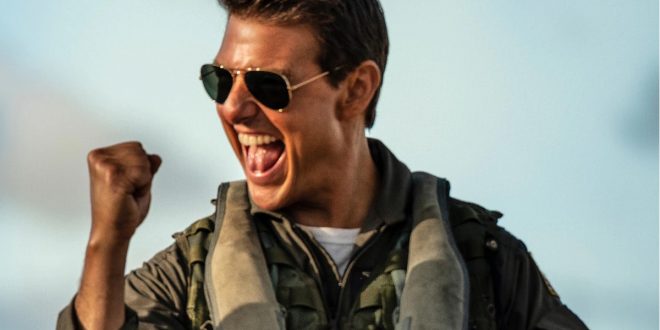 As a lifelong Tom Cruise fan, (“Risky Business” and “Born on the Fourth of July” sealed my devotion) I went full throttle, excited to the max, without trepidation to the first showing of “Top Gun: Maverick”; happily, my expectations were not only met, but wildly surpassed. I loved the film from the onset; it is magnificent and must be experienced in the theatre. Jeffrey L. Kimball’s breathtaking cinematography infuses the film with glory, majesty and nobility. Sublimity resonates at the core of every performance, even the minimalist roles: Ed Harris superbly seethes as “Rear Admiral Chester “Hammer” Cain”; Jon Hamm is rigidly professional as “Admiral Beau “Cyclone” Simpson”; Val Kilmer gifts the dying “Iceman” immense integrity and wisdom; Glen Powell is charismatically cocky as “Hangman” and has one of the foremost lines as the film reaches its climax; deliciously svelte, Jennifer Connelly emanates poise and consummate beauty to “Penny Benjamin”, Maverick’s love interest; Miles Teller (“Whiplash”, “The Order”) buffed and mustached is staggeringly cast as “Rooster”, Maverick’s nemesis.

The heart, soul, skeleton and ethos of “Top Gun; Maverick” is Tom Cruise; as “Captain Pete Mitchell” a perfectionist, requiring supernatural skills from every pilot (Cruise, and all the actors dominate the celestial); giving as good as he gets, doing his own stunts, he dazzles equally in his fiercest and stillest moments; his bravado is tempered, seasoned by years of service; fully aware of his intransigent acuity in the air and on the ground, excelling as a leader and teacher. “Mitchell” and Cruise mirror each other, both admirable men, champions of artistry, style, intelligence and profoundly, perpetually in control of their destiny.