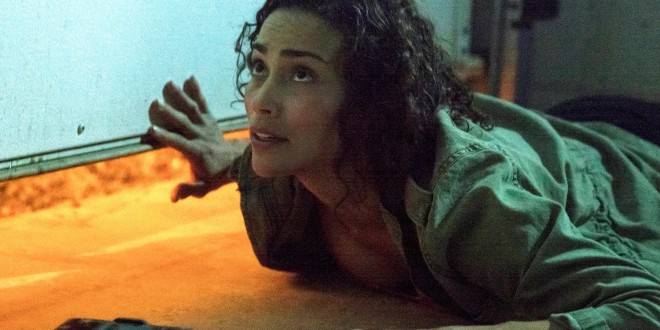 Human trafficking is a mega, insidious business, a pandemic that has infected a myriad of countries; it is the fastest growing source, behind drugs and arms trade, of income for organized crime. Television and film(“Human Trafficking”, “The Whistleblower”, “The Jammed”) have focused on this cancer to little avail; millions of young lives (primarily female) are sacrificed to the highest bidders, they are slaves to the appetites of the sick and depraved, from those holding positions of pristine power, to those groveling in the ugliness of illegalities. Shockingly, 30% of the traffickers are women.

“Traffik” written and directed by Deon Taylor, produced and starring Paula Patton is a sensationalized version of a true story; “Brea” (Patton) a journalist, on a birthday jaunt with her boyfriend “John” (Omar Epps) to an isolated, idyllic estate, joined by their friends, “Darren” (Laz Alonso) and “Malia” (Roselyn Sanchez); a biker gang/human traffickers, taunt, terrorize an egregiously erase any protagonist circumscribing their mission. Patton gives a tour de force performance but cannot save the film from creepy manipulation; women murdered for misbehaving; battered, starved victims drugged into compliance, believable but monumentally overdone.

“Traffik” will not come close to assuaging the rampant proliferation of the epidemic; the message is masticated, swallowed by the mayhem.