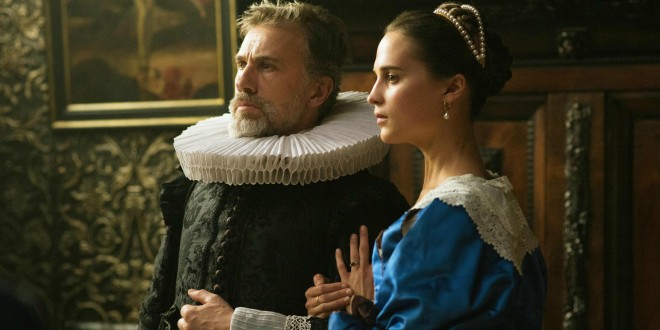 The tulip is my most favorite flower; I love its capricious personality, its up and down mood swings; I love its heartiness, its whimsy, its myriad of colors; tulips shed happiness, satisfaction, warmth. Unfortunately Director Justin Chadwick’s adaptation of Deborah Moggach’s seventeenth novel lacks the pungency, redolence, joy, blooming potency of the magical tulip. Actors Alicia Vikander, Christoph Waltz, Dane DeHaan, Holliday Grainger and Judi Dench make the best of a preposterous plot.

The bidding scenes capture the frenetic, cacophonous, competitive immediacy (reminiscent of yesteryears, before digitalization, Chicago’s Board of Trade and Mercantile Exchange) of a tumultuous, heady, make or devastate one’s “purse” in the flower auction. Today’s Aalsmeer Flower Auction, outside Amsterdam, is a wonder worth experiencing.

Religion and its precepts simmer at the heart of “Tulip Fever”; more of a morality play than a love story; ultimately one must atone for one’s misdeeds. Appropriate penance and reward, sanctioned all participants, in this overwhelmingly ambitious, at times unintentionally humorous, scenario of misplaced passion, in the age of seventeenth-century-capitalism in Amsterdam.