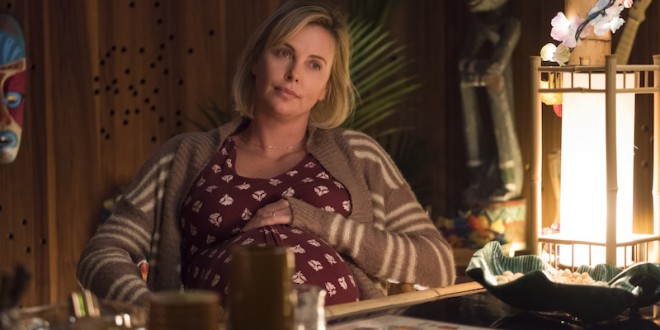 Actors Charlize Theron and Mackenzie Davis give worthy performances in a film that never satisfies, just overwhelms in its averageness. Theron, as  “Marlo” a pneumatic, beleaguered housewife, sinking unconstrained, into an emotional morass after the birth of her third child; enter “Tully” (Davis) a night nanny, designed to cure postpartum depression with huge injections of effervescence. It works for awhile but looses its legitimacy with the staged bonding of these two disparate characters, one pessimistically floundering, the other optimistically soaring.
Parenting, until realized, is cloaked in the unchartered unknown; regardless of one’s financial, intellectual, instinctive tools, it can be a terrifying, humbling state; education dictated by each new addition to the family. Also a role, so compelling, so rewarding, that no other accomplishment can conquer.

Writer Diablo Cody and director Jason Reitman (“Juno”) fail to bring the verve, vitality so needed to illicit empathy for Marlo; instead we are reminded of the glories of unaccountability, days of tantalizing narcissism, days when the mirror was your friend, now, just an uninvited specter, forecasting the exsanguination of youth and beauty. Multitudes would give their “eyeteeth” to be “Marlo”; “Tully” undoubtedly is the spirit, catalyst for her awakening, just poorly executed.