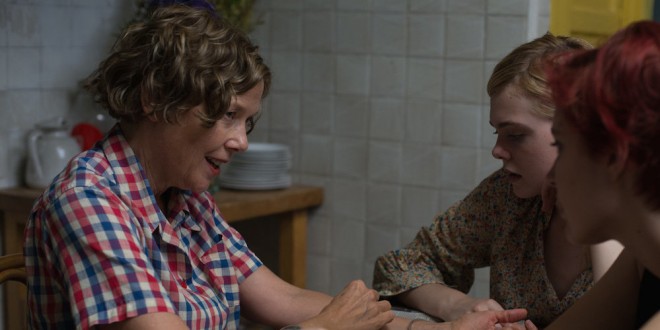 Annette Bening is an actor’s actor, losing herself in the persona of each character she portrays, from “Bugsy”, “American Beauty” to her inimitable “Being Julia” (she should have captured the Academy Award in 2004) her interpretations are profoundly, realistically flawless.

She shines as “Dorothea” a fifty-five-year-old, single mother, a cigarette perpetually joined at her lip, living in Santa Barbara with her fifteen-year-old son, “Jamie” (remarkable Lucas Jade Zumann) and two cloying full and part-time borders: “Abbie” funky, hippy, would-be photographer (Greta Gerwig, playing a different version of a character she is entombed with) and “Julie” (Elle Fanning) perpetually petulant, sexually precocious but simply a “sleep over” friend to Jamie, whose hormones are ragingly awake. It is 1979, and Dorothea, feeling out of touch with the age, and in particular Jamie, solicits the aid of Abbie, Julie and her handyman “William” (Billy Crudup rises again) to save her son from being swallowed by popular culture, indecisiveness, naivety; without boundaries, their guidance leads to an education Jamie and Dorothea had not foreseen.

Writer/director Mike Mills, as he did with “Beginners” (referencing his father’s “coming out”) in “Twentieth Century Women” focuses on his mother, born in 1924, intelligent but stymied by life’s roadblocks, struggling to comprehend and relate to a contemporary milieu and its licenses; interspersed with Jimmy Carter’s “crisis of confidence” speech, the Ayatollah Khomeini’s return, leading to the Iran Hostage Crisis, 3 Mile Island meltdown, these flashbacks ground and lend substance to Dorothea’s dilemma.

At times redundant and too prurient, but wrenchingly thought provoking; scenes, pungently powerful between mother and son, resonate with history, love and eventual understanding, respect.