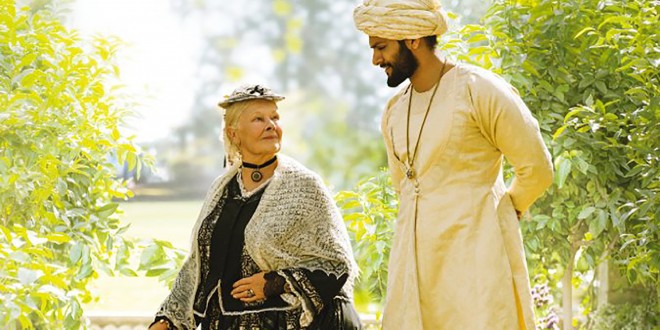 Expectations almost instantly squashed, “Victoria & Abdul” is dimensionless, flat and eminently superficial. Dame Judi Dench can imbue the “queenly” into any character and Victoria (1819-1901) is no exception (her second go as the indomitable monarch); but the story of her infatuation and overwhelming attachment for Indian, Muslim “Abdul” (sophomoric Ali Fazal) as a servant, turned teacher “Munshi” is flimsily depicted; depth, cloaked in vague, amorphous shadows. The film commences in 1887, the year Abdul and Mohammed are sent from India to gift Victoria, a coin in commemoration of her Jubilee reign. Abdul is unduly obsequious, whereas Mohammed, is the Greek Chorus, bemoaning the tyranny of the British; Adeel Akhtar lends laughter and levity offsetting Abdul’s gushy, unadulterated admiration.

What I found profoundly problematic is the characterization of the Royal entourage surrounding, suffocating the Queen; painfully platitudinous, conniving and manipulative, but given the time when India was still part of the Empire, there was some justification for their concern; an Indian servant being elevated to a rarefied status; actors Michael Gambon (Lord Salisbury) , Eddie Izzard  (Berti, Prince of Wales), and Tim Pigot-Smith (Sir Henry Ponsonby)  give gritty interpretations as the outraged, insensitive sycophants, but come across as today’s alt-right, generating nary an ounce of empathy.

Watching the day-to-day life of the Queen I recalled Richard Lovelace’s words, “stone walls do not a prison make, nor iron bars a cage”; inherited royalty, incarcerates one, till death do it part. It is no wonder the Queen found comfort away from her homogeneous countrymen, allowing her heart to break the bondage her body could not.  Director Stephen Frears’s “Victoria & Abdul” is a love story, just improperly executed.

2017-10-07
Peneflix Admin
Share !
Previous: AMERICAN MADE
Next: THE MOUNTAIN BETWEEN US