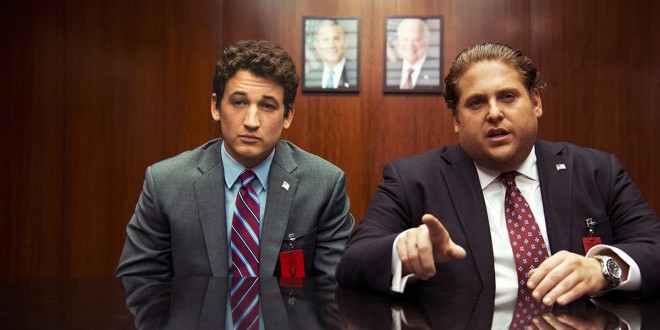 Directed by Todd Phillips based on a Rolling Stone article by Guy Lawson (eventually became the book, “The Arms and the Dudes”). The protagonists, Efraim Diveroli and David Packouz are brilliantly depicted by Jonah Hill and Miles Teller; nonfiction is realized propitiously by, for the most part, a good script, enhanced by the performances of Teller and overwhelmingly, Hill.

Diveroli and Packouz, Miami natives and quasi-acquaintances, became partners in their twenties, founding the company AEY, Inc. which sells arms to the Pentagon; Diveroli is a smooth talking flim-flam man, capable of selling honey to bees; commencing legitimately by purchasing and selling firearms online; providing arms to American forces and Iraqi police, they score monumentally when they win a 300 million dollar contract supplying weapons to the Afghan military, resulting in their “Achilles Heel”, dubious gunrunner Henry Girard (Bradley Cooper, also a producer).

The rollicking first half of “War Dogs”, amazingly infused by the stratospheric comedic acuity of Hill; Teller is terrific as the consummate foil, allowing Jonah to rant and reign. Their adventures defy believability leading eventually to the crux, examination of the moral code exhibited by the two young men; their partnership, friendship rests on their choices and phenomenally the “survival of the fittest.” Efraim and David are no longer friends.

Today, Efraim, at thirty, is suing Phillips, Warner Brothers Entertainment and Bradley Cooper for royalty and monetary damage; his book “Once a Gunrunner” came out in 2016; he has also founded a media company, Incarcerated.

Proving, ingenuity can thrive regardless of the form it manifests.