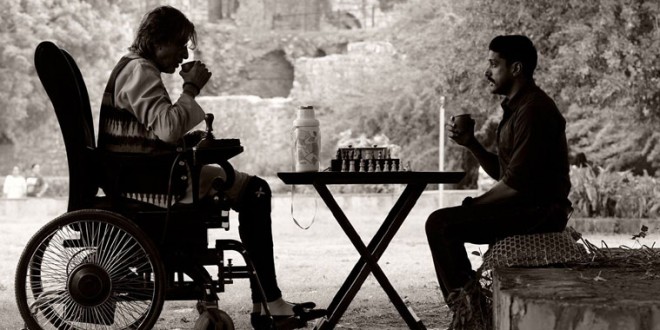 Excellent pairing of two Bollywood superstars makes for a substantially entertaining film: Amitabh Bachchan and Farhan Akhtar star as wounded men, victims of a palatably evil politician (masterfully malicious Neil Nitin Mukesh); both have lost daughters, whose demise may be traced to this egregious character.

Bachchan, “Pandit” is a crippled, chess Grandmaster, his survival revolves around teaching the game to children; chess is the foundation, the metaphor for the ensuing plot. Akhtar, “Danish” an ATS officer, is shunned by his wife after the death of their four-year-old daughter in a shoot-out. A generation apart, Pandit and Danish bond and become friends while playing chess, their mutual goal, justice for their murdered progeny.

“Wazir”, refers to the “rook” in chess; each player receives two “rooks” or castles, black and a white; they may move horizontally and vertically, and depending on the “move” may partner with the “king” (castling). Chess is intellectual manipulation at the supreme level; phenomenal stamina and concentration are the entrance keys to the elitist halls of the participants.

The Chinese proverb, “life is a game of chess, changing with each move” proves highly effective in director Bejoy Nambiar’s  thriller; the root of its success lies in the adroit interpretations of veteran Indian actors Bachchan and Akhtar; and will satisfy all audiences, especially those masters, mistresses, neophytes of the frustrating, fascinating, compelling “Duchampian” exercise.