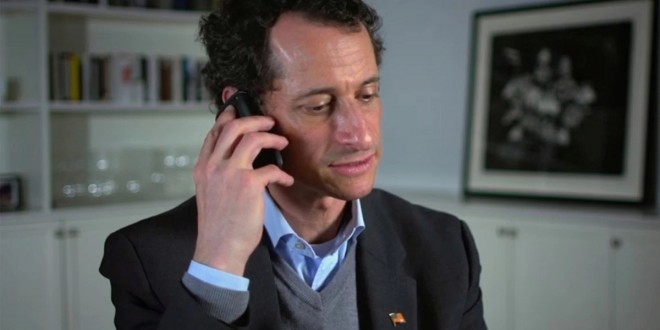 WEINER (ON DEMAND & IN THEATRES)

The creators of “The Good Wife” based their long-running television series (2009-2016) on women who stick by their politicians; husbands, caught and publically exposed, egregiously in violation of their marital vows. Anthony Weiner, a bombastic U.S. Representative (D. New York), resigned from Congress in 2011, after his midnight electronic trysts were unveiled.

Directors Elyse Steinberg and Josh Kriegman gift “Weiner” a blatant, brutally honest portrait of a man gone awry and a marriage torn asunder. Commencing in 2013 when Weiner, “Phoenix- like” rises above his previous disgraced state to run for Mayor of New York; months into the campaign a source reveals that his “sexting” had continued long after he exited his Congressional office.

Shakespearean in tone, the documentary succinctly depicts Anthony Weiner’s fall from grace, avalanche of vituperative press, talk- show humiliations, public rants, all while his exceptional wife, Huma Abedin (senior aid to Hillary Clinton) struggles to maintain dignity, watching as her husband is perpetually flayed on the salacious altar of his own making. A contemporary tragedy still unfolding.

Huma, a reluctant heroine, slips in and out of the camera’s lens: watching as Anthony, plays with his children, spiels his oratory to lauding crowds, pleading with her to be more proactive; she’s elusive, never betraying (nor ever has) the depth of the emotional, relentless throbbing his choices have caused; she has stayed, but how redefined their solitary moments, private conservations, commitment, remain an enigma, and should.

“Weiner”  fails in addressing the origin of Anthony’s depravity or the therapeutic process needed to heal; talk show host Lawrence O’Donnell asks “What is wrong with you?”

A befuddled Weiner seems to believe it is a flaw in a politicians character, the craving to fill a vacuum, obsessive pressure to win, egotistical desire to be an icon, that robs them of the ability to have “normal relations”. Bill Clinton, Eliot Spitzer, Mark Sanford might agree.