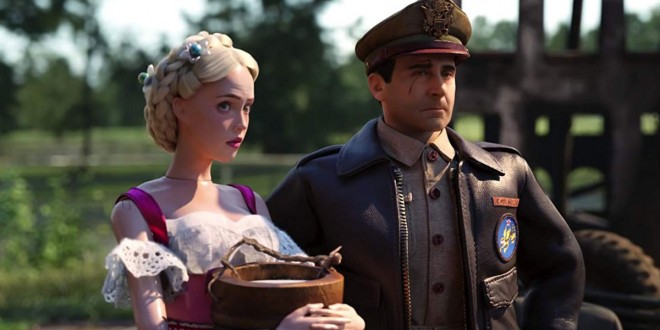 This film is a conundrum, a therapeutic fantasy, a tribute to diminished artist, Mark Hogancamp, a talented illustrator, with a woman’s shoe fetish, beaten, so viciously, he now uses his camera to record his manufactured milieu where “evil” is annihilated by female warriors; his dolls, resembling kind women in his life, combatants who save him from Nazi villains (stand-ins for his actual attackers); he is a captain, the setting is WWII, in a fictional town in Belgium, “Marwen”. A weird scenario, combining animation, archival WWII footage, with contemporary techniques. Director Robert Zemeckis’ exceedingly ambitious attempt to recreate Mark’s tragedy is only partially successful; Steve Carell’s astounding depiction of brain-damaged Mark is beautifully empathetic; Carell’s career has grown exponentially from comedic (“40-Year-Old Virgin”) to dramatic (“Foxcatcher”, “Beautiful Boy”) and in “Welcome to Marwen” he is at his pinnacle; in every frame, he captures Mark’s catastrophic pain and debilitation along with his intransigent hope to survive; he gifts Mark love, respect and inimitable admiration. He is the sole reason to visit Marwen.

The film flounders from the get-go, weakly reminiscent of a Wes Anderson, Tim Burton production; animated sequences are silly, boring and the “lady killers”, a simplistic, pejorative nod to “wonder” women, wearisome one-dimensional victors. The real-life replicas, given limited substance to work with, the exception “Nicol”(Leslie Mann), are stereotypical models of the “feminine mystique”.

Marwen is not so much welcoming, but an inventive ploy, a prime example of someone who saves his psyche, by bringing his imaginative world to life.