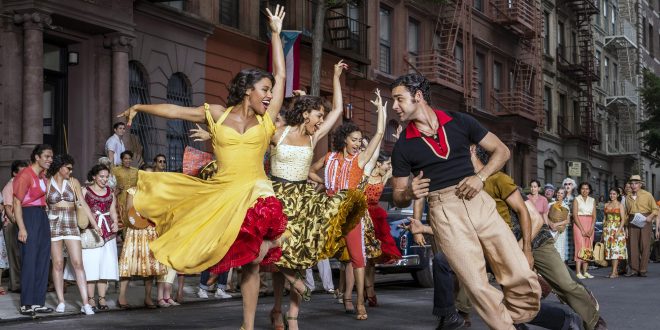 WEST SIDE STORY (in theatres)

Regardless of its redundancy Steven Spielberg’s “West Side Story” is a foot-stomping, hip-swiveling, heart-throbbing stampede of choreography, cinematography, and electrifying energy; the legitimacy of the Spanish speaking cast (Sharks) versus the “gringos” (Jets) aka the “entrenched” threatened, rivaled by the “immigrant” is a resounding metaphor for today’s migratory issues. The anxiety percolating at the nucleus of two cultures is exacerbated by the relationship between “Maria” a Puerto Rican, virginal beauty (astoundingly refreshing Rachel Zegler) and ex-Jet leader “Tony” (Ansel Elgort was too tall, too handsome and too sensitive to be the hardened, brutal, recently released convict); the initial dance in a gym, planned placation between the warring factions, ignites, with rhythmic harmony, the devilish divisiveness between the Jets and Sharks, portending tragedy.

A phenomenal, hefty supporting cast vibrates with undeniable realism: Mike Faist, “Riff” a Jet loyalist, seethes with the accumulated frustrations of a man with no options, knowing his destiny has been scripted; David Alvarez, “Bernardo”, Maria’s dominating brother, a born fighter and blighter, wanting not only his place in his adopted city, but the annihilation of the natives of Lincoln Square; Ariana DeBose, “Anita”, Bernardo’s intended, maximizes her every scene, blessed with vocal, physical, emotive skills beyond the extraordinary; Rita Moreno, seasoned to refinement after winning the Academy Award for her portrayal of “Anita” in the 1961 version of “West Side Story”, returns as “Valentina”, owner of the store in which Tony works; she is the guru, Shaman, and ultimately the soul of her desecrated neighborhood.

The film shares ownership with both English and Spanish languages; lack of subtitles could be unnerving for some but justified because it is a dual story of fear, disenfranchisement, and loss.

Earlier this year Lin-Manuel Miranda’s “In the Heights” was a sanctified version of Washington Heights, N.Y., where fantasies really do come true. Both films serve glorious entertainment and accolades for America’s disparate pluralism.