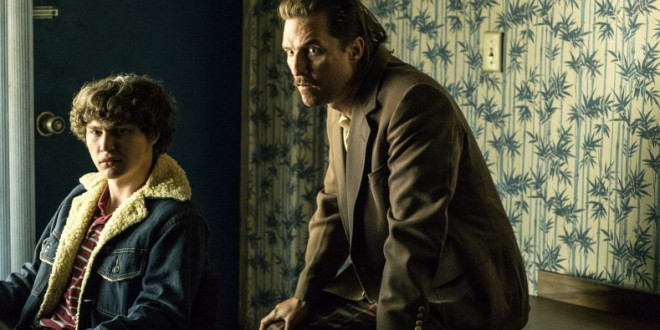 The 1980’s, halcyon height of the drug wars in Detroit, a cavern of crime, devastation, addiction and fourteen-year-old, Rick Wershe Jr.; Richie Merritt is blissfully faultless in his debut performance; he maneuvers comfortably through the underbelly of Detroit’s infected, disenfranchised, punitive world. Director Yann Demange’s source was 2014’s “The Trials of White Boy Rick” by Evan Hughes, and it egregious, 1973, Lifer Law; 650 grams of cocaine equals life imprisonment, no consideration of parole; subsequently, overturned.

Rick’s easy manipulation of the kings of coke, his acceptance and reliability stem from his training by his gun dealer father, Rick Sr. Matthew McConaughey struts his panoply of acting attributes as a father desperately yearning for a better life for his son and daughter, Dawn, a drug addict (Bel Pauley, apt portrayal); his altered wares, carted from one gun show to another, lend viability to a substandard lifestyle. McConaughey, is a constant chameleon, a many-faced god, cloning his every role, a wizard unparalleled on the screen.

Rick, and his connections catch the eye of the FBI ( Jennifer Jason Leigh, Rory Cochrane) and narcotics officer (Brian Tryee Henry) and is conscripted into their sphere of espionage, subterfuge and ultimate betrayal.

“White Boy Rick” sensationally captures the culture of the era: dilapidation of government sponsored housing, and its stricken residents, crack houses and its doomed, seamy strip malls, dead ends highlighted by glitzy neon nothingness; a family trying but crumbling under inordinate circumstances; regardless of demographics, boundaries transcend ethnicity, gender, tragically touching all who dwell within its domain.

2018-09-16
Peneflix Admin
Share !
Previous: A SIMPLE FAVOR
Next: PENEFLIX IS ON A TWO WEEK SABBATICAL