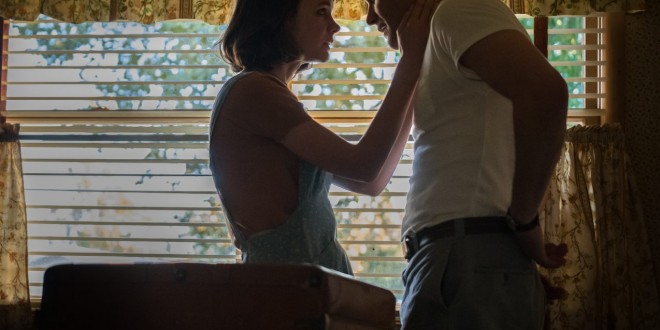 Gloom, bleakness, a pensive dread hovers over the initial scenes of this vital, directorial debut by Paul Dano; a family on the brink of disintegration, newcomers to a tiny community in Montana, where fires are devouring the mountainous range; blue skies warring with encroaching, villainous smoke.  The major conflagration is silently raging in the “Brinson” household: “Jerry” (another prescient performance by Jake Gyllenhaal) is an obsequious, back-slapping golf pro, who looses his position at the country club, only to wallow in self-aggrandizement; “Jeanette Brinson” (Carey Mulligan is gifted in the role), in “Stepford” style goes the distance encouraging, placating Jerry’s ego; “Joe” (Ed Oxenbould’s sensitive, conflicted depiction, is the heart of “Wildlife”) fourteen, bright and recognizing the fissures in his parents marriage, grapples with his concern and love for both; more than in a state of flux, this family is flirting with annihilation.

“Wildlife” informed by a 1960 landscape, resonates with confinement, entrapment; women were defined, and oftentimes suffocated, pulverized by their marriages; this retrospective proves how far we’ve come, while acknowledging the miles, we’ve yet to transverse.

2018-11-04
Peneflix Admin
Share !
Previous: BOHEMIAN RHAPSODY
Next: WHAT THEY HAD