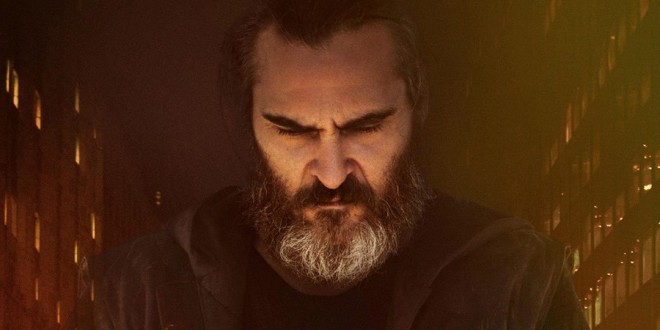 YOU WERE NEVER REALLY HERE

This disturbing, fragmented film directed by Lynne Ramsay is an episode, a “bubble” in a troubled, haunted, suicidal man, “Joe”; only Joaquin Phoenix could grasp the intricacies, trauma of this overwhelmingly disenfranchised, complicated character’s life.  Joe, a defender of the righteous, a slayer of the untoward, a savior of the unprotected; his mission accomplished with “hammer” like precision. With the exception of his mentally compromised mother (Judith Roberts) he is alone with his harrowing nightmares/flashbacks: abusive childhood, a veteran, damaged by the abominations of war; comforted, that suicide is a viable alternative to living in agony.

Intrigue escalates with the abduction of a senator’s daughter,”Nina” (eerie, disordered, enthralling performance by Ekaterina Samsonov); discomforting confusion as Joe’s hallucinations and reality magnificently collide with Ramsay’s direction and the astounding musical score by Johnny Greenwood. The music, so retro, its poignancy in potent contrast to the death and carnage of the scenario.

“You Were Never Really Here” adapted from Jonathan Ames’ 95 page novella,  beautifully paints a portrait of one man’s anguish, his disjointed nightmares depicted, as anyone’s are; with consciousness the sensible becomes nonsensical; Joe is the anomaly, whether in sleep or wakefulness, he is incapable of escaping the torturous reality of his existence.