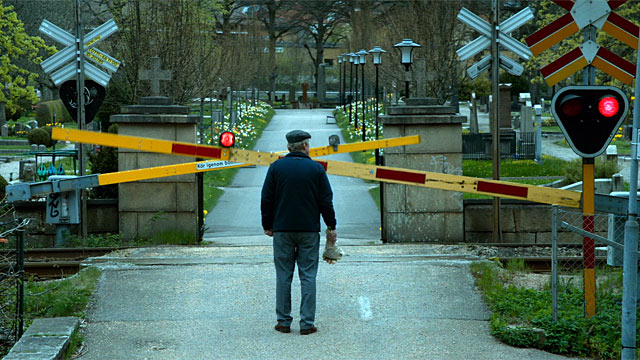 Fifty-nine-year-old “Ove”, (Rolf Lassgard) bereaved widower, childless, retired, dresses impeccably, clean-shaven daily, preparing for his suicide; based on the novel by Fredrik Backman and directed by Hannes Holm, “A Man Called Ove” is a profoundly moving depiction of a man scarred by life’s injustices, rescued emotionally by an enchanting teacher “Sonja” (Ida Engvoll) only once again to be stunned by Job-like vicissitudes. This is a wonderful, humorous and genuinely beautiful story embracing sorrow, unmitigated pain, love and the power of man to be redeemed by his fellow man.

With each attempted, aborted suicide we visit Ove in his youth (Filip Berg); his adoration of his father and his lifelong passion for his Saab; his meeting Sonja, gifting his life with vivaciousness, passion for literature, sunshine at its peak infuses their marriage; now, his every day is informed by his rounds of the gated community he resides in, railing at his neighbors, and visiting Sonja at her grave site.

A courtly curmudgeon meets his match when pregnant Iranian “Parvaneh” (Bahar Pars), two daughters and her “idiot” husband move next door; Ove is rendered helpless by her onslaught of humanity, levity,  joyous demeanor; she unleashes and purifies the horrific torture Ove wants desperately to escape. The uniqueness and development of their friendship is the core of this magnificent film.

Periodically there’s a movie so quietly, touchingly humane, powerfully reverent to the human condition, sacred in its telling, that it leaves one awe-struck;

“A Man Called Ove” falls into this sparsely inhabited category.