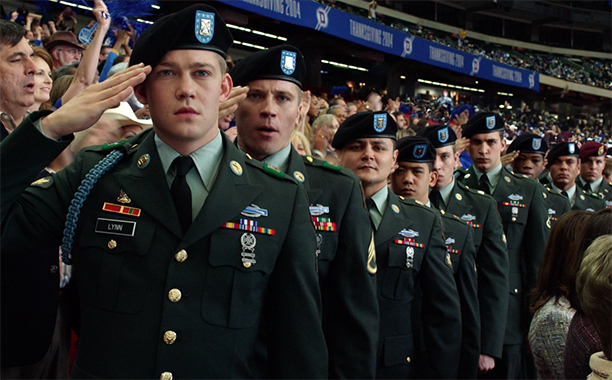 Director Ang Lee’s exploration of the Iraq War (the action takes place in 2004) is depicted through the perspective of nineteen-year-old hero “Billy Lynn” (a gentle, sublime Joe Alwyn); poetically, gracefully the film moves from the cacophony of battle to the equally cacophonous thunder of a football halftime, theatrical display, on Thanksgiving Day. The owner of the Texas team, “Norm Oglesby” (restricted, uncomfortable Steve Martin) is interested in making a film about Bravo Company and their heroics; these young men serving as tools for his own self aggrandizement.

Lee focuses on the normalcy of civilians vs soldiers no longer able to adapt to a life away from war’s arena; their bond, because of their perpetual flirtation with death, not only solidifies their camaraderie and love but their uniqueness in a mundane situation. Iconoclastic, laser-tongued officer “Dine” (dynamic, pungent performance by Garrett Hedlund) castigates, cauterizes those incapable of understanding the psychology of war. Surprisingly, Vin Diesel as the group’s shaman, “Shroom” is terrific spewing his philosophical acceptance of “the bullet has already been fired”, fate’s finality.

Kristin Stewart, adding another jewel to her crown of accomplishments, as Billy’s sister “Kathryn”, in contrast to her brother’s unscathed physiognomy, is scarred physically and emotionally; her palatable devotion to her brother would irrevocably fracture with his demise.

2016-11-20
Peneflix Admin
Share !
Previous: NOCTURNAL ANIMALS
Next: BLEED FOR THIS