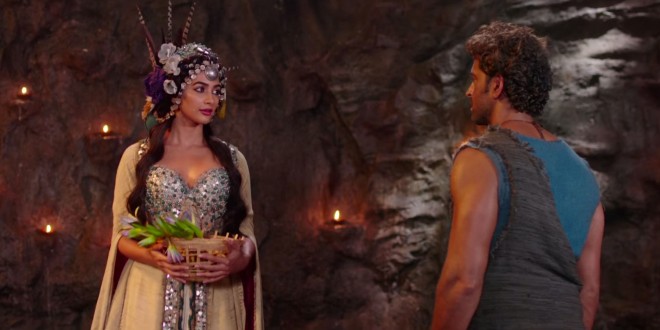 Two Bollywood megastars in an Olympic box office competition. Tough decision as to who wins the gold, Akshay Kumar for “Rustom” or Hrithik Roshan for “Mohenjo Daro”.

“Rustom” is a fictionalized version of the 1959 Nanavati Case; a scandalous, sensational affair, where a naval officer supposedly murders his wife’s lover;

Akshay Kumar, absolutely devastating in his white uniform, gives a solid, if stilted performance as the cuckolded, vengeful spouse; waif-like Ileana D’Cruz is perfect as the fragile, seducible, wife; Arjan Bajwa is the doomed, philandering cad, who earns three well-deserved bullets for his unscrupulous behavior and Esha Gupta,  his conniving, amoral sister, slithers from scene to scene in provocative, form enhancing, 1950’s couture. The courtroom displays of one-upmanship are commanding but unduly long and tiresome. Far more interesting is the nonfictional account of the incident; this trial was the death blow to Jury trials in India.

With astronomical tears and trauma, it held my attention.

Olympian sculpted, flawlessly beautiful (even with two thumbs on his right hand) Hrithik Roshan rules in this epic film about the lore of a town existing in the Bronze Age; magnificent in scope, with a musical score by Academy and Filmfare award winner, A.R. Rhaman (“Slumdog Millionaire”), even the periodic lunacy of the plot cannot stunt mesmerism; Roshan morphs from a naïve indigo farmer, dreaming of unicorns to a gladiator of propitious heritage destined to salvage a populace from maniacal leadership. Heart- palpating action abounds for almost three hours; romance is served in the guise of Pooja Hegde; beauty contest winner, model, physically worthy of adulation (the camera laps her every charm) but acting acuity has yet to be proved. The final twenty-five minutes drenched in tsunami rains, is masterful in capturing, in Noah proportions, the ultimate demise of a city built by greed and men, prime examples of self-aggrandizement.