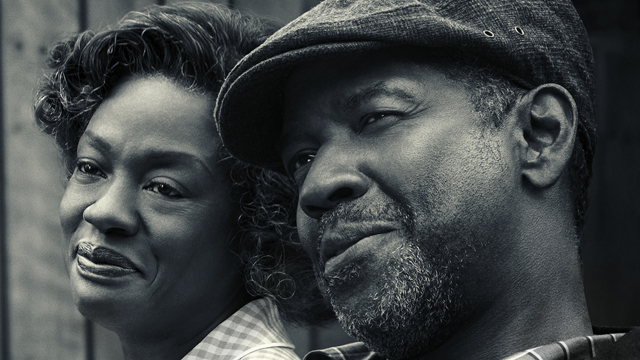 Pulverizing performances, astounding direction and the inimitable genius of playwright August Wilson (1945-2005) make “Fences” one of the finest films, not only of the year, ever made.  From commencement to conclusion it pulsates with magical realism and insight; delves into the black man’s aesthetic, dissects with formidable honesty the history of a young fourteen-year-old boy, born in 1903; illiterate, abandons home, a malicious, fiendish father; steals to survive, incarcerated for fifteen years. Now in 1956, a sanitation collector, married with a seventeen-year-old son, plus a thirty-four-year-old son from a previous relationship. The man is “Troy Maxson” and is portrayed with celestial elegance and majesty by Denzel Washington (director), an unforgettable feat, redolent with wisdom, frustration, humor, meanness and angst. Troy, a man whose years in prison led to a dream of playing professional baseball; he perpetually reminisces, every Friday evening, with his coworker and ex-inmate “Bono” (magnificent Stephen Henderson) over a pint of gin, ranting, reviling the white man for stunting his career.  Washington is spellbinding in the role. As is Viola Davis as “Rose” his wife, whose innate goodness is a beacon of warmth and safety, she offsets his ebullience and divisiveness with genuine love and kindness. Their scenes together soar with powerful devotion, appreciation and lacerating pain.

“Cory” (masterfully poignant, Jovan Adepo) Troy and Rose’s gifted son, victim of plummeting abuse, because of his football prowess; Troy refuses to realize that the world has changed and men of color can triumph on fields of competition. Sadness permeates their unsalvageable relationship.

“Fences” is a luminous study and metaphor for life’s choices, what one allows in or out; Troy taunts “Death”, daring it to encroach on his turf. He is a man with profound failings, but inspires respect, understanding, not pity. More than any film in recent years “Fences” elucidates a black American’s journey; the vast cultural divide, diminishing, but still prevalent today.

I love this movie for what it gave me, illumination!