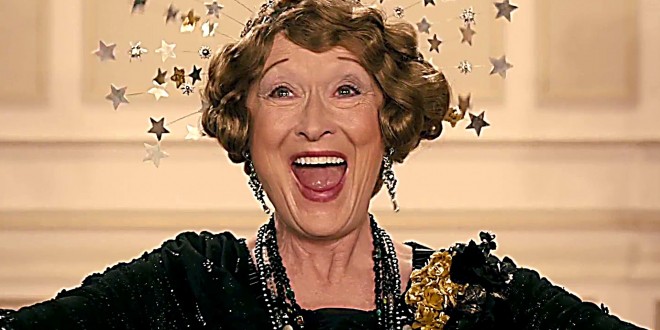 Notwithstanding, Meryl Streep’s iconic acting acuity and director Stephen Frears good intentions the film is lackluster and sparkless compared to France’s  “Marguerite” (with the incomparable Catherine Frot); Florence Foster Jenkins (1868-1944) was a music patron, completely tone deaf,  delusional in fancying  herself an opera diva; because of her wealth, generosity and protective partner, many suffered through her screeching interpretations of Mozart and

In fairness to Streep (who is a rather accomplished singer as evidenced in “Mama Mia” and “Ricky and the Flash”) her grasp of the real Florence Foster Jenkins lacks the subtle interpretation that Catherine Frot brilliantly achieved.

Hugh Grant, struggles to rise above “HughGrantness” but with the exception of his remarkable “footloose”, Fred Astaire dance number (shades of “Love, Actually”) just doesn’t cement as Jenkins’s lifelong partner, agent and love of her life, “St. Clair Bayfield” (1875-1967); his care and concern emanate more from a sense of responsibility than the heart.

The one worth watching is Simon Helberg (television actor and piano player) in the role of “Cosme McMoon” Florence’s accompanist; his face is a map of incredulity, overwhelming astonishment, hilarity as he listens to her horrific warbling for the first time; his performance saves the film from total banality.

Ironically, Jenkins’ s Carnegie Hall recording in 1944 is the most demanded of all the Hall’s concerts to this day.  Ceaseless shocks; this version of Jenkins’s goodhearted, miss-guided vocal illusions was more than sufficient for the audio sensibilities of this viewer.