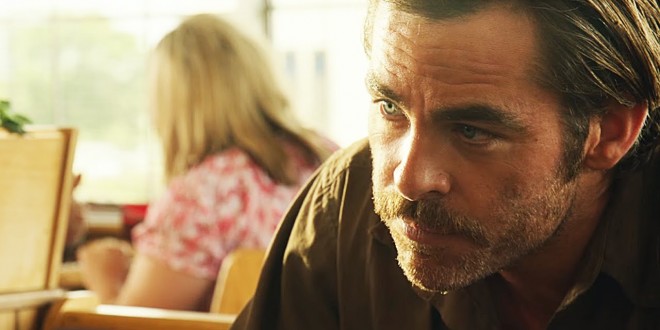 From the onset, in this contemporary Western film, the protagonists are determined to accomplish their mission, regardless of the plagues visited upon them. Brothers, “Toby and Tanner Howard” (blazingly portrayed by Chris Pine and Ben Foster) are downtrodden, desperate, petty bank robbers; Toby, the architect behind the heists, has never flirted with the penal system, but wants to salvage his mother’s inheritance and his debt to the bank, ensuring the legacy of his sons; Tanner, a longtime resident of the state, loves the adrenalin rush of the mask-protected, empowered thief. Their brotherly banter is infused with the love and angst of shared DNA and its vicissitudes, primarily poverty.

Their nemesis, soon-to-be-retired Texas Ranger, “Marcus Hamilton” (Jeff Bridges in a marvelously seasoned role, imprisons his every scene) and his lugubrious partner, “Alberto Parker” (Gil Birmingham) substantially holds his own against Marcus’s stingless, racial slurs. Working in tandem, predicting the next bank to be stripped of its wares, leads to its tension-induced climax.

Director David Mackenzie and cinematographer Giles Nuttgens realistically stroke the hot, thirsty Texas plains; reminiscent of the archival, iconic landscapes of  “Giant”, “No Country for Old Men”; peppered with the encroachment of modernity, digitalization; it’s a new era and the cowboy, fighting obsolescence,  must adapt to its future.

“Hell or High Water” resonates with the ethics of a medieval morality play; each man follows his own path, regardless of the circuitous route.