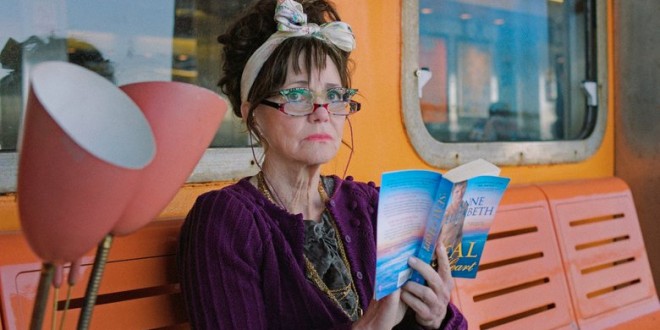 HELLO, MY NAME IS DORIS

It is instinctive in horror, war, egregiously violent films that we turn away, shut our eyes or exit the theatre; this is the first time that I experienced such horrific, unmitigated, cringing embarrassment, sickening malaise in a film, that on the surface, is billed as fanciful and funny; in actuality is a pathetic pandering, to thankfully a tiny, elite group.

Sally Field, who will be celebrating her 70th birthday this year is “Doris”, a kindly misfit, outrageously dressed in Carmen Miranda couture, who falls insanely and passionately in love with a twenty-something co-worker “John”  (Max Greenfield); the film might have worked if it had stayed in the realm of fantasy but instead morphs into foolish study of a lonely hoarder who surrounds herself with the detritus of other people’s lives. Her mother has died, her brother, sister-in-law and therapist want her to salvage whatever is salvageable in her life. A friend “Roz” (Tyne Daly) her granddaughter “Vivian” (Isabella Acres) are invested in and truly care for Doris.

The goodness, kindness, nonjudgmental attitude of the millennials is refreshing;  embracing her quirkiness, eccentricities; but devastatingly, disastrously fuels the flames of her infatuation.

Field’s is in remarkably fine form, physically and artistically, but pitiful Doris is the victim of her own unrequited life; she did not choose to love John but was absurdly unrealistic, tragic in her aggressive pursuit of the unattainable.