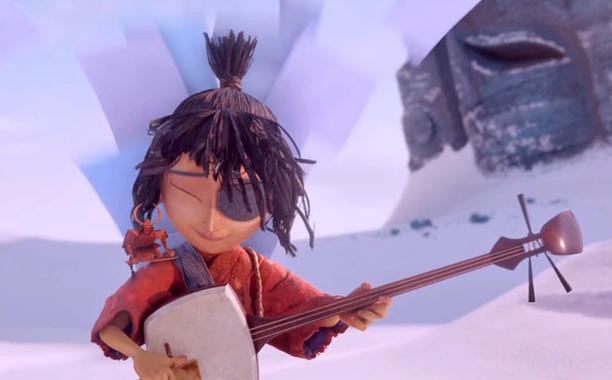 KUBO AND THE TWO STRINGS

By a wide margin one of the finest films of the year; stunning in its message, characterization; a positively superb example of stellar, sensational, spectacular animation (and I do not care for the genre).

Directed by Travis Knight, written by Marc Haimes, Shannon Tindle, Chris Butler in collaboration with Laika Production Company have created a fantasy world imbued with magic, goodness, vileness, vengefulness; it resonates demographically, regardless of culture, touching every cord of the emotional scale. Commencing on a windswept night, a sorrowful, magnificent Japanese woman, on a mini craft, relinquishes her fate to the whims of a sea, whose formidable crests recall Ukiyo-e artist Hokusai’s (1760-1849) woodprint “The Wave”; she lands on the shore with a bundle of magical, mystical innocence, her son  “Kubo” (voice of Art Parkinson); he is a gifted, enchanting child, missing an eye, and an unmatched storyteller; his paper (origami) tales, as long as they are launched before sunset, enhance his whimsical reputation, and keep he and his mother alive.

Nostalgia permeates the film; anyone who has lost a loved one will recognize the longing experienced by Kubo, missing, yearning for stories of his warrior father; his mother, crippled by the malicious cunning of her father and sisters, weaves wondrous anecdotes about her deceased, beloved, husband.  Kubo, to survive and overcome familial forces of evil, must find a bewitching suit of armor; he is joined in his quest by “Monkey” (voice of Charlize Theron) and “Beetle” (voice of Matthew McConaughey); their adventures sing with humor and horror. We are completely invested in their fate, bearing witness to the outcome. The power of the film lies in its hypnotic, mesmerizing facility to kidnap one’s imagination; genius lies in its lasting memorability.

Viewers must stay until the credits are concluded;  observe a taste of monumental, creative ingenuity, generated to bless audiences with a fable that will change one’s perception of animation forever.