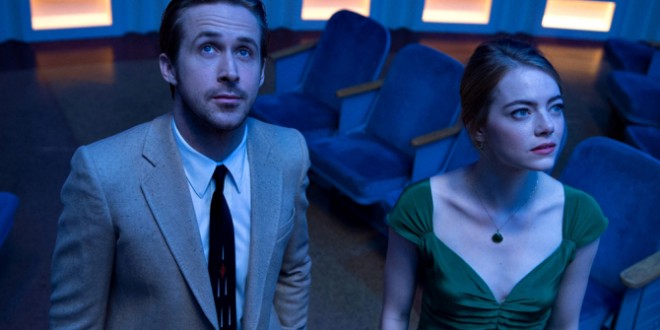 Director Damien Chazelle’s contemporary musical, with an archival reference to the past, proves on its second viewing, more deliciously palatable than the first; “Mia” and “Sebastian” are pungently poignant, naïve, fanciful starry-eyed lovers; their youthful, optimistic dreams may be realized; they have yet to be stunted by life’s wrenches; they dance, sing, captivating one’s sensitivities. Ryan Gosling and Emma Stone imbue their roles with profound enchantment, they glow with the hope and promise that only youth, ephemerally, bestows; an aspiring actor and a jazz musician waltz, fall in love to the musical score of Justin Hurwitz and choreography by Mandy Moore. It is a simple, swooning, romantic story; absent is the guts and gore, murder and mayhem redolent in today’s films. It’s magic lies in its soft beauty, ease in its formulaic process; lacking a thousand metaphors to be dissected by the viewer. Also, igniting a renaissance, homage to Jazz’s historical “greats”: Louis Armstrong, John Coltrane, Charlie Parker, Miles Davis, Thelonious Monk. Singer and songwriter John Legend combines the past and present of the genre as “Keith”, Sebastian’s band-master.

At its heart, “La La Land” and its plaintive “City of Stars”, mystifyingly recalls youth’s unrequited hopes, dashed passions and in the inimitable words of William Wordsworth:

“What though the radiance, which was once so bright

Be now for ever taken from my sight,

Though nothing can bring back the hour

Of splendor in the grass, of glory in the flower

We will grieve not, rather find

Strength in what remains behind.”