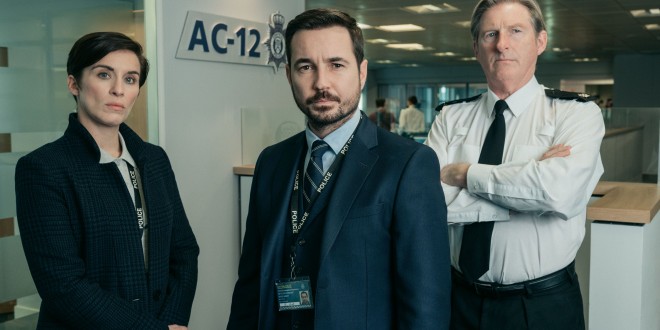 Four seasons worthy of “Beneficial Binging”; “Line of Duty” is a BBC television series that has seared the imaginations of all who have ventured into its corridors of crime, circling around “bent” coppers and their manipulation of police procedures; beyond thrilling, writer Jed Mercurio, weaves a network of nefarious deeds with immaculate intelligence and scrupulous attention to detail, confounding those “wankers” fancying themselves armchair Sherlocks’. The cast varies but the staples, “Superintendent Ted Hastings” (remarkable Adrian Dunbar), “DS Steve Arnott” (superb Martin Compston) and “DI Kate Fleming” (Vicky McClure, poster girl for the MeTooers); it is exciting meeting actors, profoundly proficient, foreign to our viewer landscape.

Brutality thrives but not as bludgeoning as American audiences are familiar with. Astonishing, is the civility of the interrogation process; regardless of intensity, the questioning by investigators is conducted with respect; fraught with “sir’s”, “mam’s” “thank you”s”; the suspect, without a lawyer, may not be questioned; the emotional unraveling of the culprit is riveting, demanding concentrated skill from the protagonists.

“Line of Duty” with stunning introspection, dissects, both exemplary and untoward, allowing viewers to empathize or shun, intricate characters, created to baffle, loathe, admire but above all, remember.