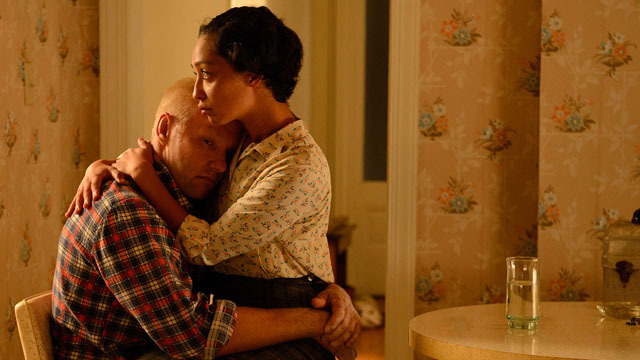 2016. Although it is rare, interracial marriage is prevalent and legal, since the Supreme Court in 1967 overturned anti-miscegenation laws; the defining case was Loving vs Virginia. The populace regularly sees splayed across a myriad of media vehicles the actualization of this decision: Kardashian/West, DeNiro/Hightower, Lucas/Hobson, Turner/Bach.

Two simple people, Mildred Jeter and Richard Loving married in Washington D.C. in 1958, returning to Virginia, where their marriage was deemed punitive, the state (along with 20 others) adhered to miscegenation.

Director Jeff Nichols paints a love story worthy of accolades. Joel Edgerton and Ruth Negga provocatively, compellingly star as Richard and Mildred Loving, who were imprisoned and eventually banned from the state of Virginia; their tenacity in the face of egregious racism prevailed when Bernard Cohen (Nick Kroll), with the ACLU championed their cause, on the circuitous route to the Supreme Court. Edgerton and Negga imbue their roles with inimitable grace, humility and intense integrity.

We should never have known this couple; marrying at 23 and 17, a lifetime devotion, validated by marriage and eventually three children, segregated from their families, Mildred, after watching the March on Washington in 1963, writes a letter to Attorney General Robert Kennedy about her plight. Her intrepid stance is the mettle that inspired “Loving vs Virginia”.

“Loving” celebrates righteousness, fearlessness, more than anything, love is a powerful aphrodisiac, capable of changing the world.