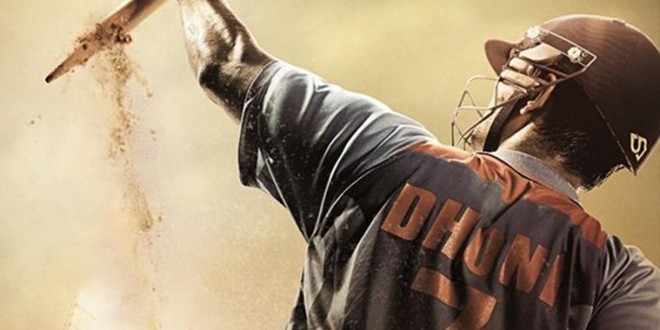 Director Neeraj Pandey (“A Wednesday”) has made an incredible bio-pic of the inimitable cricket player Mahendra Singh Dhoni (born, 1981); actor Sushant Singh Rajput nails to perfection the player that Time magazine hailed as one of the most influential people in the world. Being a Westerner, the game of cricket and all its “wickets” is a fug of unfathomability; but undeniably, the movie excels in educating those unfamiliar with the intricacies of the sport and the overwhelming athletic genius needed to dazzle on its playing fields.

M. S. Dhoni, born in Ranchi (now Bihar) of modest means, was such a genius; he was a prodigy, could outrun the wind and was a master, right-handed batsman and wicket-keeper. In 2007 he became Captain of India’s Cricket team (leading them to unimaginable victories); the path to recognition and success,  paved with innumerable obstacles, many “untold” until Pandey delved into the history of “an icon in the making”. Surrounded by familial love, he was a dedicated student and committed to the grueling, daily, two-hour practice schedule. As he matured, his acuity was acclaimed, but setbacks both financial and personal, plagued his progress; eventually he worked as a Travelling Ticket Examiner at the Kharagpur railway station. No matter the trials his gentlemanliness never vacillated; he was genuinely kind and respectful to everyone he encountered, even in disputes. Rajput is phenomenal in the role.

Tragedy steals his first love, vivacious “Priyanka” (exquisite Disha Patani), he later meets and marries “Sakshi” (consummately cast Kiana Advani) and Dhoni’s satellite continues to escalate. The film cements the viewers attention with the intensity of the matches; the spectators: family, friends, nation with their idiosyncrasies, universal to all sport fans: sitting in the same chair, wearing the same clothes, praying to their gods; the unmitigated joy of victory, and the bleakest depression with defeat.

“M.S. Dhoni: The Untold Story” ranks with recent memorable sport bio-pics: “The Blind Side” (Michael Oher), “Rush” (Niki Lauda & James Hunt), “42” (Jackie Robinson); everyone loves the triumph of an unknown, the inspiration and hope they infuse, crashing through impregnable odds, grasping the cup and tasting, for an ephemeral moment, the overwhelming aphrodisiac of sublime success.

2016-10-06
Peneflix Admin
Share !
Previous: DEEPWATER HORIZON
Next: THE GIRL ON THE TRAIN