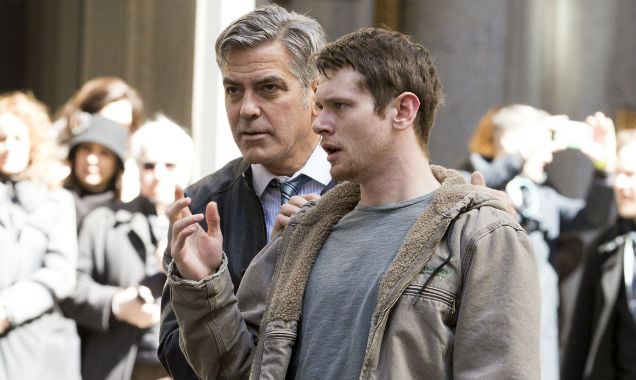 Totally preposterous, jejune imitation of Jim Cramer’s “Mad Money”; Cramer,  Harvard-degreed, author, Hedge Fund manager has been the legitimate host of Mad Money for over ten years, in other words a man who knows what he is screaming about. George Clooney as “Lee Gates” the emcee of “Money Monster” is a glib imposter; his schtick, charlatan dance numbers, placid intelligence (incapable of remembering the names of his guests) requires the teleprompter and constant “puppeteering”  from his producer “Patty Fenn” (Julia Roberts). Enter crazed  “Kyle”  (unsympathetic performance by Jack O’Connell) a delivery man, who in this age of unrestricted rage, massive slaughters by disgruntled employees, is allowed to walk uninspected through security; gun-toting, blaming the loss of his invested funds on Lee and the the CEO of “IBIS” a publically traded conglomerate that in a single day, because of a computer “glitch”, lost 800 million dollars.

The chimerical scenario marches toward absurdity as the viewer is expected to empathize with a down-trodden man who foolishly invests every cent of his inheritance in a “sure thing”, guaranteed an 18% return on his investment, holds a television station captive, justifying his derangement; Lee, with a bomb strapped to his chest, is converted to the cause, and with the aid of Patty, his crew, and quisling “Diane Lester” (Caitriona Bolfe) unveil the fraud behind the “glitch”.