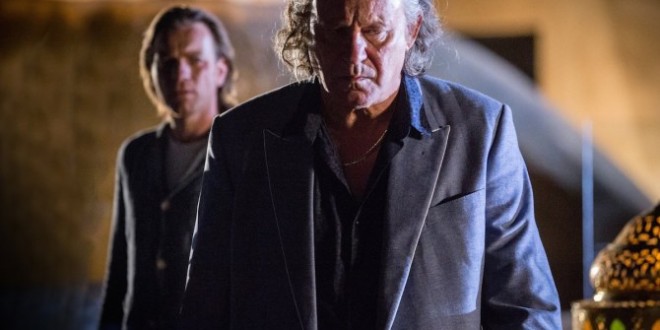 OUR KIND OF TRAITOR

Based on John le Carre’s (1931) 22nd book, directed by Susanna White, would have fared better as a television mini-series; even then it could not match the recent BBC production of “The Night Manager” staring Tom Hiddleston and Hugh Laurie.

The tepid title lends little legitimacy to what the masses surmise as traitors: Mata Hari, Julius and Ethel Rosenberg, Aldrich Ames, Claus Fuchs….those were traitors worth the energy, fascination even romanticism history infuses them with. But Stellan Skarsgard is triumphant as “our kind of traitor”, “Dima”, a money launderer willing to trade momentous information about Russian drug lords and the untoward politicians who support them, in return for the salvation of his family; Skarsgard is unstoppable as Dima, giving a performance pulsating with power and viability.

Dima with stunning finesse elicits the aid of “Perry” (bemused, befuddled depiction by Ewan McGregor) a poetry professor, on holiday with his wife “Gail” (Naomie Harris) a “sparkless” duo; the action, with travelogue acuity moves from Marrakesh, London, Germany, Swiss Alps orchestrated by “Hector” a British agent, whose morality triumphs the clandestine actions of his superiors, helping Dima secure safety for his family; Damien Lewis is riveting as a man limited by factors beyond his sovereignty.

In conclusion, two performances do not make “Our Kind of Traitor” our kind of movie.