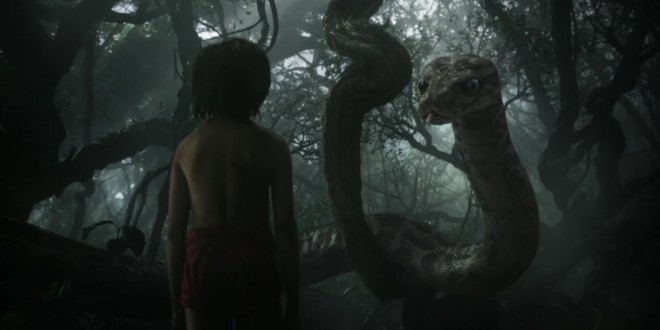 Animation has to be sensationally compelling to ambush my attention and even more fascinating for me to become emotionally invested in the characters.  Disney’s “The Jungle Book” , inspired by Rudyard Kipling’s iconic tales,  directed by Jon Favreau (“Chef”),  staring child prodigy Neel Sethi, is a film to be viewed more than once, an enchanting story, rich with lessons, for all ages, profound, at times terrifying, but always pragmatically realistic.

“Mowgli”, “man-cub” (Sethi), raised by wolves ( voices of Lupita Nyong’o and Giancarlo Esposito as his protective parents) is being threatened by “Shere Khan” ( powerful voice of Idris Elba) a wrathful, brutal tiger who was maimed by Mowgli’s fire -wielding father. It was a painful, arresting decision to cast Mowgli out of the pack; his acclimatized jungle intrepidness cannot save him from the vengeance of Shere Khan. His journey to the camp of the two-legged creatures is paved with Ulysses travails, particularly unnerving is his encounter with slithering snake “Kaa” (syrupy, lusty voice of Scarlett Johansson), a “Siren” who hypnotically lures him into darkness and doom; he is championed by “Baloo” a slothful bear (Bill Murray) and “Bagheera”  a sleek, black panther (Ben Kingsley). Dramatically filmed, nature’s unpredictable whims, captured magnificently, pulsate throughout “The Jungle Book”.