Latest Reviews
Home » Hollywood » THE KILLING OF A SACRED DEER 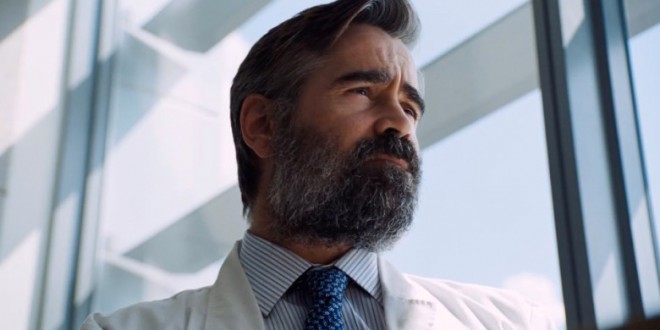 THE KILLING OF A SACRED DEER

Greek auteur Yorgos Lanthimos’s (“Dogtooth”, “Lobster”) newest, mystifying and cerebral film, resonates with references from Homer’s “Iliad” (8th century BC.);  Iphigenia, King Agamemnon’s daughter sacrificed for the war effort against Trojans; and the inadvertent killing, by same Agamemnon, of goddess’ Artemis “sacred deer”; mythological deities excel in catastrophic vengeance, without boundaries, flowing from Mount Olympus embracing both divinities and earthlings in its retaliatory path.  Aware of its source, viewers are invited into the purified realm of “Dr. Stephen Murphy” (one of Lanthimos’s favorites, Colin Farrell, pulsates in the role), as does the heart he is operating on; surgery concluded, Stephen and anesthesiologist, “Matthew” (Bill Camp) converse in a clipped, monotonous cadence about watch bands; immaculate corridors frame them, reminiscent of a classical proscenium arch. Lanthimos is skilled in translating his theatre adroitness to the screen.

The plasticity of perfection dissolves as sinister reality creeps into the scenario; a moral message, “eye for an eye” cloaked with the absurd, bleak hysteria exhibited by contemporary protagonists; Kidman and Farrell give galvanizing performances as their formal, claustrophobically informed existence disintegrates. “The Killing of a Sacred Deer” portents realized, is disturbingly compelling and hypnotic.