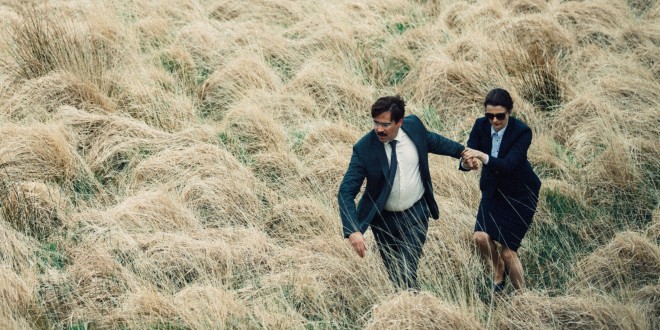 At 2015’s Cannes Film Festival it was impossible, no matter the length of time spent in line, to get into this monumentally-hyped film by director Yorgos Lanthimos (“Dogtooth’); I viewed it today with six others in a cavernous theatre. It is one the bleakest, saddest, cruelest movies I have ever witnessed and I fervently wished I hadn’t.

It takes place in a time where being “single” is illegal; there is a hotel for those disenfranchised, lonely souls hoping to find, within an allotted period of time, their life’s partner, if unsuccessful, they are turned into an animal of their choice. Drab, dull, divorced “David” (pudgy, mustached  Colin Farrell) selects a “lobster” for its longevity and potency powers.

The characters move and communicate robotically, they all seem to have been lobotomized; amoral, bereft of human dignity or kindness; so painful to experience I found myself yearning for a natural disaster to cleanse the city and woods of these damaged, deranged individuals and the sick code they must conform to; sadly my wish was unrequited.

David escapes the hotel and is taken in by an outlawed group, “The Loners” whose rules are just as bilious, led by “Loner Woman” (Lea Seydoux, “Blue is the Warmest Color”); David, who is short-sighted, meets “Short Sighted Woman” (Rachel Weisz), she narrates the scenario as their destinies collide.

The musical score, primarily by composers Shostakovich and Stravinsky,  infuses terrifying urgency to a threatening, sunless landscape and dysfunctional narrative.

We live in an age where planes are blown out of the sky; an age of suicide bombers; murder has replaced reasoning, religion is bastardized by warped ideals; do we need “The Lobster” to yearn for a future more demented than what we  already have?