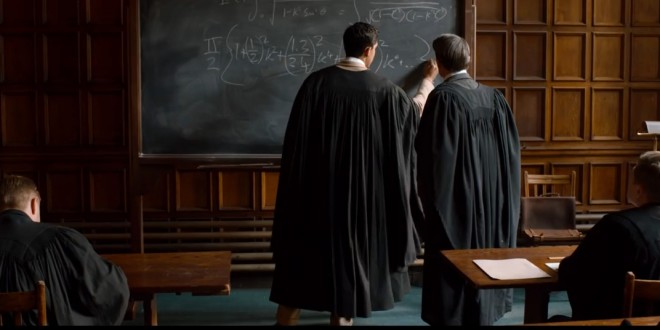 THE MAN WHO KNEW INFINITY

The decimal number system can be traced to the Indus Valley (3000 BCE); the concept of “zero”,  the ubiquitous ruler, all were conceived in India. Indians have a natural affinity for mathematics and science.

Writer/director Matthew Brown delves into the remarkable story of gifted, unschooled mathematician, Srinivasa Ramanujan (1887-1920) born in Tamil Nadu, India and brilliantly educated G.H. Hardy (1877-1947) of Surrey, England; Hardy brings Ramanujan to Trinity College in 1913, where their disparate backgrounds congeal over analytic theorems, mathematical analysis, fractions; theirs is a finite language that few can interpret and even fewer comprehend.

Dev Patel soars as “Ramanujan”; he tributes his wisdom, inspiration to his god who sinuously slithers from his mind, tongue to his hand where unsolved, obscure mathematical theorems are realized; he confounds his professors who interpret his knowledge and surety as arrogance.  Patel is wrenching as an isolated genius, an outcast in a milieu where his diet, religion, and especially his ethnicity, are shunned and maligned.

Jeremy Irons, equally superb as eccentric “G.H. Hardy”, champions, educates and contributes to Ramanujan’s publications; the development of their relationship harbors at the core of the film.

“The Man Who Knew Infinity” beautifully captures, presents, enlightens, with profound insight, the plight and loneliness of a man who knew infinity, never wavered in his resolve, and now almost a hundred years after his death, worthily resides in the realm of Descartes, Euclid, Euler, Turing.