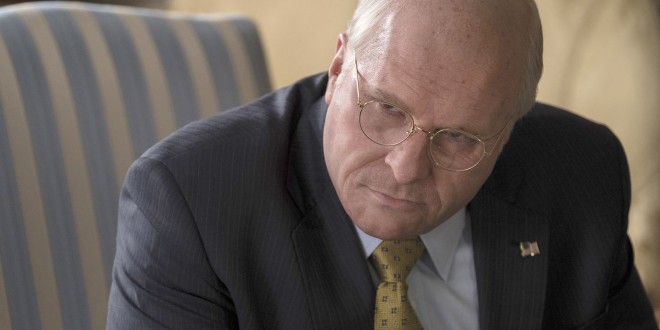 A title referencing malfeasance, iniquity, corruption and moral depravity leaves no question in the viewer’s mind as to writer/director Adam McKay’s opinion of Vice President Dick Cheney (2001-2009); flashbacks of the most horrific period in American history are scalded in our memories and uncomfortable to revisit; to be in a position of power on September 11, 2001 was not enviable and retrospectively, still open to interpretation and analyzation, the potency of the decisions made at that unnatural time.

Strangely, at first unsettling, are the performances of the actors, they transcend the protagonists, eventually being the highlight of the film: Steve Carell is mesmerizing depicting the rise and fall of Congressman Donald Rumsfeld (Secretary of Defense 1975-77 again, 2001-06); Sam Rockwell’s brilliantly uncanny portrayal of George W. Bush proves his explosive transformative capabilities; Amy Adams is terrific as Lynne Cheney, a fiercely intelligent, formidable force in saving Dick from his Halcyon, hedonistic lifestyle; McKay sees Lynne as “Lady Macbeth” to Richard’s “King of Scotland”.

The most astounding metamorphosis is Christian Bale as Dick Cheney, gaining forty-three pounds, enduring painful neck exercises to increase its girth, miraculous makeup, leads to his banishment and Cheney’s clone materializing. Bale’s career has been defined by his faculty to submerge his persona allowing the character to emerge: 2009, “The Machinist”, losing sixty-three pounds; 2011, “The Fighter”, garnished him an Academy Award for Best Supporting Actor; from Batman to an “American Psycho”, an “American Hustler” his chameleon properties are unlimited.

“Vice” delves into Cheney’s enigmatic rise and manipulation of Washington and its supreme leaders; questionable is the exploitation of the Unitary Executive Theory (Article Two of the US Constitution), allowing the President to control the entire executive branch (similar to the infallibility of the Pope); problematic, the seeds of today’s dysfunctional political abyss were sown in George W. Bush’s era.

McKay’s “Vice” is an exegesis focused on a man and a time yet to be fully comprehended, but worthy of continued scrutiny.