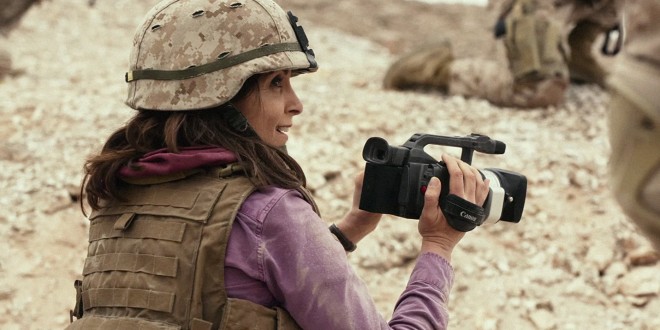 Based on the book, “The Taliban Shuffle: Strange Days in Afghanistan and Pakistan” by Kim Baker, a war –correspondent,   2002-2007.

I admit that having seen only tidbits of “30 Rock”, (or “Saturday Night Live”) I cannot separate Tina Fey from her doppelganger, Sarah Palin.  Fey’s  innate comedic timing lends itself perfectly to television, less so in film (“Admission” “This is Where I Leave You”); as Kim Baker a journalist thrown into the chaos of  “Taliban Terrain” she is implausibly cocky and unbelievable, a benign nitwit, surprisingly, not annihilated within minutes of her arrival in Kabul.

Directors Glenn Ficarra and John Requa sensationalize “Whiskey Tango Foxtrot” by focusing on the hedonistic lifestyle of the correspondents: copulation, drugs, alcohol partnered with profanity and disregard for civility take precedence over the horrific obstacles journalists face in their daily trysts with iniquitous carnage. Possible death or maiming is a pervasive fear, rendering unaccountable behavior in their down-time; too many scenes lapse into a “Warholian” ennui.

There have been a myriad of accounts by war correspondents about the addictive lure of “battle”; it’s an aphrodisiac so potent that their sensibilities, reality are paralyzed by its overwhelming Siren-like serenade. Actor Christopher Abbot as Kim’s Afghan guide, “Fahim” is magnetically succinct while explaining her addiction, powerful as any substance, but concocted from within; its poisons result in unmitigated psychological and physical calamities.

“Whiskey Tango Foxtrot” is an anemic attempt to infuse humor into a humorless arena.

Better by far is “Motley’s Law” a fascinating documentary featuring Kimberly Motley, an African-American lawyer, practicing in Kabul, Afghanistan. Earning her badge of courage every day; for eight years she has made a difference in a post-Taliban milieu.