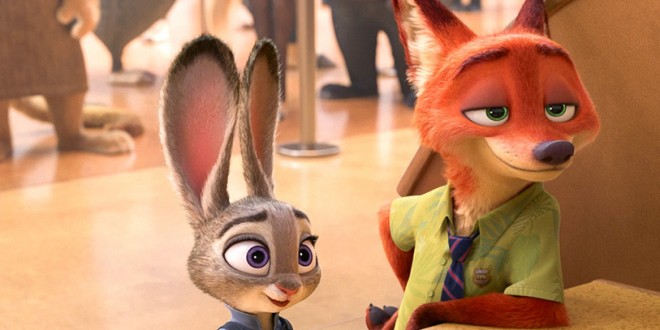 Animation has never appealed to me; even as a child I wanted the “real deal”; there are exceptions and “Zootopia” falls into that category;  a welcome hiatus from the limbo of mediocrity film lovers wallow in between the Academy Awards and the summer movie blitz.

“Zootopia” is a contemporary, mammal metropolis reminiscent of any “people-populated” city; disparate neighborhoods, anthropomorphic animals, uniquely identifiable as one’s family, friends, neighbors and “unlikeables”. Pitched in the epicenter of this milieu is adorable, bewitching  (cuter than “Bugs”) “Judy Hopps”, the first bunny to be a police officer; her dedication and enthusiasm is annoying to her larger counterparts; she is relegated to “meter-maid” status but ambitiously pursues a missing person case, partnering with “Nick Wilde” a sagacious, charming fox with an untoward history.  Their serpentine relationship bests the odds, gifting viewers a moral compass that translates beautifully into a two-legged universe.

Ultimately, the ubiquitous message of self-awareness, fearlessness in scrambling, grappling for the “gold”; assuredness overcoming predictability is innovatively, imaginatively accomplished.