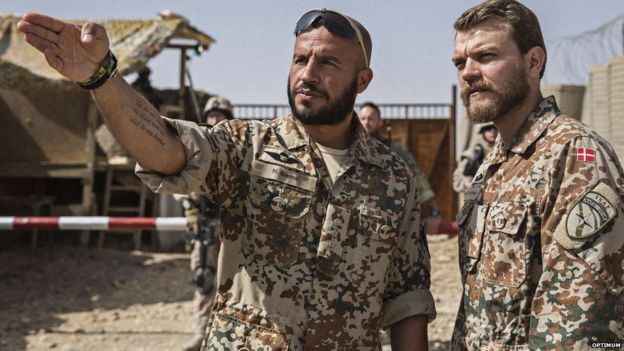 There have been some remarkable war films; my favorites include: “The Longest Day”, “Apocalypse Now”, “Saving Private Ryan” and HBO’s “Band of Brothers”. Danish director Tobias Lindholm’s “A War”  brilliantly, falls into this rarefied category, as one the finest films revolving around the chaos, cacophony, catastrophic milieu of battle and its equally devastating aftermath.

Danish peacekeepers in war-torn Afghanistan, led by “Commander Claus Pedersen” (humane and glorious performance by Pilou Asbaek); Pederson is a soldier’s, soldier: empathetic, caring, totally respected and loved by his men; concerned for the welfare of the Afghans under his protectorate, until all goes awry.

For fifteen minutes viewers are witnesses, participants in suffocating, ear-splitting, smoke-blinding, explosive combat; unaware of the source of the attack (cinematographer Magnus Nordenhof Jonck’s succinct use of the hand- held camera is chillingly effective), decisions, made in a nanosecond, plague forever. There are no “rules of combat”, reason, logic are substituted with bloodied, maimed dead soldiers/friends,  and a fear so psychologically traumatizing that in retrospect, memory is erased.

Pederson is relieved of his command and the action continues in Denmark where he is on trial for war crimes; supported by his courageous wife “Maria” (marvelous Tuva Novotny) and three worshipful children, his goodness challenged, haunted by the death of innocent Afghan children. The “gray area” in “A War” is positively pulverizing; accountability, guilt, remorse perpetually questioned. How can a panel, many of whom, have never experienced the “fog of war” sit in judgment of those who have?  “A War” is a metaphor for all conflict; each individual must rectify his conscience with his actions.

Denmark’s nominee in the Best Foreign Film category is a masterful analysis of the human condition.