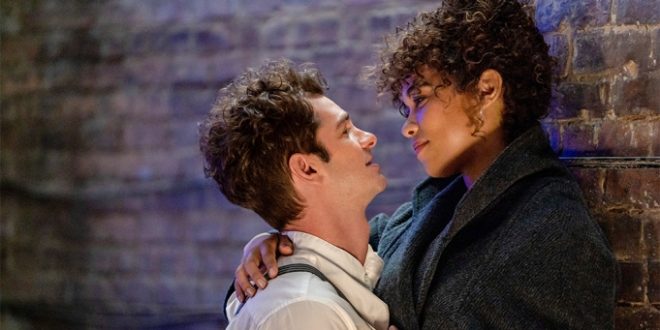 Stephen Sondheim (1930-2021) a behemoth of stage and screen, an influencer, inspirer of countless, including Jonathan Larson (1960-1996) whose momentary existence gifts “Rent” a synopsis of his life; a forever legacy reminiscent of Puccini’s “La Boheme” is an absolute must: “a play about writing a play” with its intoxicating highs and calamitous lows, Lin-Manuel Miranda’s supreme direction, and by far one of the most thrilling, titillating performances of the year, Andrew Garfield as the beleaguered rock monologue genius,  Jonathan Larson; flying off the screen singing, dancing, sobbing, playing the piano as if it was created solely for him; here is a spellbinding tour de force portrait of a man, so fearful of aging, he crammed a lifespan into a few rare and scant years. An accomplished accompanying cast: Alexandra Shipp, Robin de Jesus, Jordan Fisher, Judith Light, and stunningly Stephen Sondheim enhanced the shining scenario, but could not touch the blazing, blinding Andrew Garfield, in the unrivaled role of a lifetime.

POWER OF THE DOG

Still clinging intrepidly to my psyche; engaging on Netflix, a second viewing into the complex, brilliant, obscure nuances of director Jane Campion’s marvelous mind. There is a profound greatness in “Power of the Dog”, resonating with biblical references, edginess of 1924’s disparity between the genders; chaos, bedlam of sexual identity; cruelty: dissected, eviscerated, vivisected. A recent article in the New York Times’s, focuses on the life of Jane Campion, opening a depth of meaning, unnoticed on the first showing.

We are exposed to a Western movie (filmed in New Zealand) whose beauty is pleasantly placating while simultaneously blatantly brutal. Cumberbatch cannot be bested (reference previous reviews), although in fine company, as an Academy Award winner!

Increasing the STARS TO FIVE!!!!!