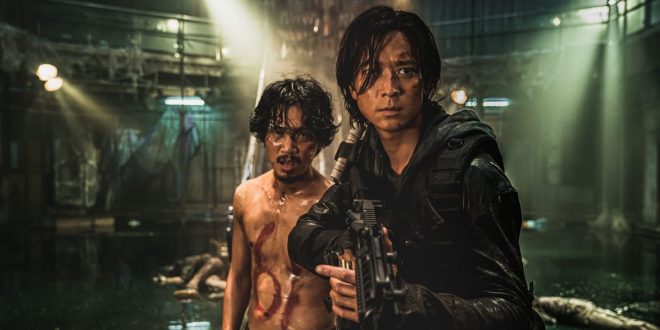 Korean filmmakers are “kings of creep” and the horror genre topples the titillation scale with their imaginative creativity; a genre that seems to have exponentially grown with the pandemic; things can degenerate and viewing these films confirms the worst case scenario.

Director Yeon Sang-ho scores with an allegorical tale of zombies versus humans, on a train to “Busan”; a “virus” that infects but does not kill; here is class warfare, with the boring perpetuality of a businessman being untoward, doffing the interests of the common, working man; ultimately as the train scurries to its destination; each car representing a tableau, stripping the unessential from its passengers: survival of the fittest, goodness prevails to a point, accountability slaps the riders as they fight to remain humane, watching benign strangers become gruesome assailants, blood- sucking leeches. Phenomenally filmed, performed, Sang-ho’s message is exuberantly executed, leaving audiences pungently aware that this is not your average horror film.

“PENINSULA”,  a continuation of the “zombie” theme lacks the metaphorical potency of “Train to Busan”; director Yeon Sang-ho’s simplification of characters (gritless, one-dimensional, bad and not-so-bad); nocturnal (the zombies cannot see in darkness) games, chases, rambunctious antics, cleverly portrayed but the element of “shock and awe” is disappointingly absent. Also, blatantly obvious, are the doomed and blessed. I viewed this in the theatre with two other people.

“1BR” (NETFLIX) A twisted tale of moving into the wrong apartment, at the wrong time; excellent acting adds power to this cunning example of a herd mentality, gone awry. THREE STARS!!!