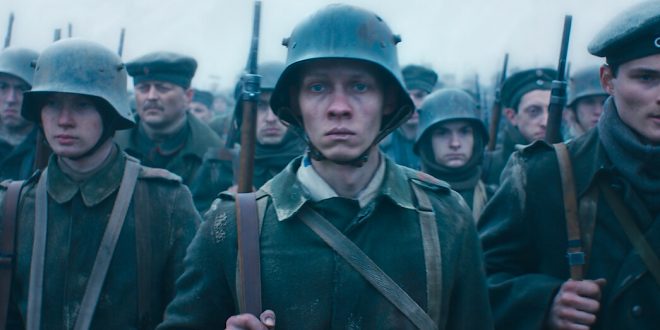 Writer Erich Maria Remarque’s (1898-1970) iconic novel “All Quiet on the Western Front” (1929) film depiction is positively outstanding, compellingly watchable and one of the finest productions on television today; riveting to the point of exhaustion, German director Edward Berger vivisects the naivety of teenagers rallying around the “flag”, ignorant of the hideousness of the battleground; and the immediate, crushing reality of the dirt, mud, blood and death confronted daily on a landscape of destitution and terror; the battle scenes, especially hand to hand combat are frighteningly beautiful portraits of senseless demise, cauterization of youth, tearfully depressing.

This is the third adaptation (1930, it was the first novel to win the Academy for Best Picture); bludgeoning perfection shouts in every scene; watching the narrator “Paul” (Felix Baumer) as his world disintegrates, his friends dying, maimed; incapable of grasping the intricacies, politics of devastation transforming his psyche and soul. Through the eyes of ordinary men, soldiers, bleeding, revealing the intimacy of their lives, the film soars to greatness.

With political clairvoyance the disastrous effects of the Versailles Treaty, fodder for WWII, are foreshadowed. “All Quiet on the Western Front” elucidates a soldier’s, any soldier’s, march from innocence to the nonsensical, guaranteeing an unrecognizable, unimagined metamorphosis.

2022-11-05
Peneflix Admin
Share !
Previous: THE GOOD NURSE (NETFLIX) TICKET TO PARADISE (IN THEATRES)
Next: THE BANSHEES OF INISHERIN (in theatres) ARMAGEDDON TIME (in theatres)