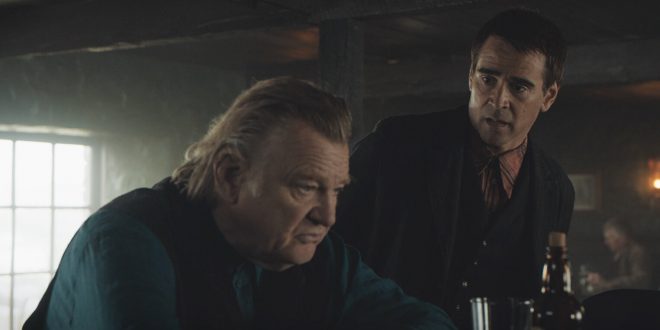 If for no other reason, seek out this film to see Colin Farrell’s transformative performance; he is mesmerizing, stupefying as “Padraic”, living a secluded life on the fictional island of Inisherin, off the Irish coast; Padraic, a farmer, borderline “daff”, content living with his sister, “Siobhan” (sensitive Kerry Condon) and interacting daily with “Colm” (phenomenal Branden Gleeson) his closest friend; two actors destined to work together (“In Bruges”) galvanizing each other to excavate unexamined virtuosity. Here, they are estranged friends: Colm, bored by the repetitious relationship, threatens to sever his fingers (he is a fiddler) if Padraic does not cease all forms of communication.

It is 1923, and the Irish Civil War is in full bloom, and the spirited, wicked, screeching “banshees”, forecast death; the sounds and smoke in the distance, a metaphor, portending the cataclysmal demise of a friendship. Writer/director Martin McDonagh, steeped in Irish fables, myths and magic weaves a tapestry, at first glance, simplistic, but with further exposure, arras of intricacy unveils its cruelty and inhumanity. “The Banshees of Inisherin” is a masterful tale, written and depicted by masters.

Ambitiously titled; but everyone reaches a point where the “two roads diverge” and the decision dictates how you choose to move forward; such is the autobiographical film by director James Gray; an analyzation of the turning point in his life in 1980; “Paul” (Michael Banks Repeta) an eleven-year-old would-be artist, in public school, befriends “Johnny” (Jaylin Webb) a black, slightly older classmate; a mischievous partnership destined for extinction or eventual incarceration; obvious contrast between privileged and deprived. Paul’s grandfather “Aaron” (Anthony Hopkins’s wizardry depiction tips the scales in astounding) his sage advice is instrumental in Paul’s future and actualizing the “American Dream”. Anne Hathaway and Jeremy Strong as Paul’s parents perceptively portray a Jewish couple, aware of their complicated history, struggling to reach a son vehemently adverse to their tutelage. A myriad of issues: race, discrimination, political disparity, familial angst all simmers at the core of a boy searching for his own road to tread.